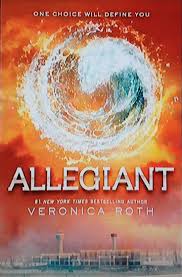 The issue with this book is the same issue that has plagued the whole series: it makes literally no sense! I have to admit, when I first finished this book, I didn’t think it was that bad. At least, it wasn’t nearly as stupid as the first two books AND it did finally answer the questions that have been bugging me since Divergent. (Such as: Who came up with a stupid idea like the factions in the first place? And why did they pick these five traits?) The problem? I started to think about it. And then it all began to fall apart.

Seriously, everything in this book is illogical and badly thought out. Firstly the idea for the factions is still ridiculous, especially if you think about how they’re supposedly trying to cure people. The experiment doesn’t make much sense, since the factions actually act as a barrier to a cure and actively kill those people who are supposedly “safe”. Plus there are huge plot holes- like how is erasing everyone’s memory going to change the US government’s mind not to kill GDs? Isn’t that obviously suspicious? It seemed a bit of a rushed conclusion and not that well thought out. On top of that both Four and Tris act out of character at points in the book with no real explanation (Four does things with blind obedience and Tris is almost willing to let her brother sacrifice himself). So, yeah, it wasn’t great by any stretch of the imagination.

That being said, I didn’t hate reading it and even enjoyed it at times. The ending, I thought, was particularly bold and unexpected. I’d even go as far as to recommend this to people just looking for a fun read. Just don’t think about too much.