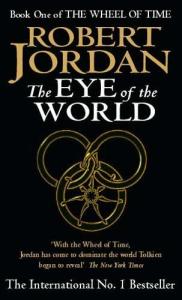 I will be brief about this book: I hated it. (See Robert Jordan- that’s how to be succinct!) The only positive thing I can say about it was the prologue was decent- but it was downhill from there. It would be generous to say that reading this book felt like watching paint dry, because at least then I might have felt like I’d achieved something. Instead, I felt like I’d wasted my time reading a rehashed, dull version of every single fantasy book I’ve ever read. I swear there wasn’t anything new or different or even interesting about it.

Obviously just by virtue of it being fantasy, it’s marketed as the next Tolkien. But it has about as much in common with Tolkien as a cheap knock off “designer” bag in Camden has with a genuine Prada- because there is absolutely nothing special about the plot, the characters, or even the way-too-thought-out setting. It’s a walking cliché. If you don’t believe me, try doing “The Fantasy Novelist Exam” with Robert Jordan in mind http://www.rinkworks.com/fnovel/ (I may have made this blog just to share this quiz, because it’s awesome). There is no way Robert Jordan could have passed this test- I mean he loses a point at 33 just for being Robert Jordan. Which is fair.

And, as I’ve already mentioned, it was boring to boot. I read an excellent blog yesterday by Matthew Wright about info dumps and it instantly reminded me of Jordan, because there are info dumps galore here. I couldn’t move three pages without more exposition. It felt like Robert Jordan had written an entire saga of backstory and he was just desperate to show it off- whether it enhanced the plot or not (which it did not). It’s a never ending stream of tangents that drags on for 800 pages! 800 pages!!! One day they may use his book as an example of how not to write. Then again, I can’t imagine professors being cruel enough to set this book to their students.

Evidently, I won’t be continuing on with this series- even if Brandon Sanderson did write the end (I love Sanderson, but I won’t suffer through god-knows-how-many Jordan books- even for him).

Rating: 1/5 bananas (cos I need some ammunition to throw at Robert Jordan’s head if he ever comes back from the dead!)

12 thoughts on “Eye of the World Book Review/Rant”