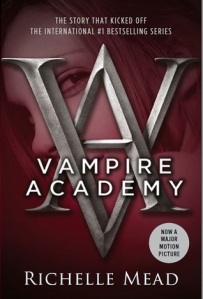 Alrighty- welcome to my first book review of 2016!

For the most part, this was a pretty decent book- nothing too special, nothing too crazy. I had very low expectations, so it was highly unlikely it was going to disappoint me. But then it didn’t exactly surprise me in any way. When I was thinking whether to do a review of this, I pretty much checked everything off in my head: the characters were fine, the romance was standard and the plot was mediocre.

So why am I bothering to do this review? Well, there was one huge issue that left me with a gazillion question marks. And that was the world building. While Rose’s personal motivations are understandable, because of her friendship with Lissa, I literally do not get the world Mead has created here. The lore for this book makes no sense.

Because the whole vampire/guardian thing does not work.

I mean, I sort of get the fact that half-vampires (Dhampir) want to kill evil vampires (Strogoi), but c’mon why would they want to save the “nice” vamps (Moroi). I mean, the Moroi may have special powers and everything, but they’re still vampires. Why would the Dhampirs care about that? They’re half human after all- so where’s their humanity? I mean, vampires are glorified parasites for crying out loud. So why would the Dhampir want to protect them?

Oh that’s right- Mead answers that question by explaining that the only way the Dhampirs can reproduce is by sleeping with the Moroi. Riiiight. Cos that makes total sense… Oh no wait- it doesn’t. I mean- at what point did Dhampirs decide that having children was worth protecting with parasites?  Do they think their race is so important?

The simple answer to that is no. The Dhampir are pretty much fine with being second class citizens and looked down on by the Moroi. I mean, the Dhampirs literally get compared to mules for crying out loud. But it’s all a-ok, because the Moroi do them a *massive* favour by helping them reproduce- right? *Heavy sarcasm* What is going on here?!?

And of course, as well as having no chance with the snooty Moroi, there are silly rules in place so no Dhampir can go off with another Dhampir (cue obvious angst for future books) so there’s no way of them ever having a decent relationship. As if this sucky situation couldn’t get any worse. Remind me why the Dhampir go along with this again? Can anyone please explain this to me??

So yeah, not a terrible book, and definitely not the worst one I’ve ever read about vampires. But the world-building has no logic- it’s almost as bad as sparkly vampires… almost…