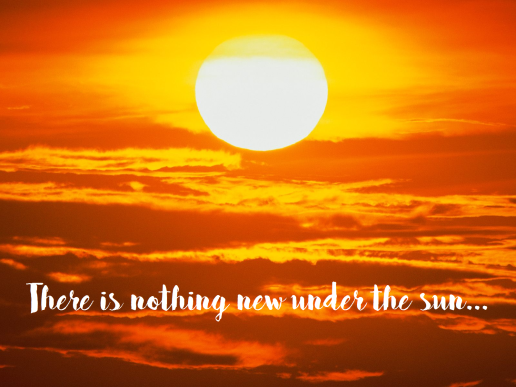 Like anything else, literature is subject to fads. Descriptive versus minimalist styles go in and out of fashion, genres pick up popularity only to fall from favour in a matter of months, and what we view as “good” changes with the wind. Ever since the dawn of modernism there has, however, been a fad that just refuses to die. And that is the desire to create something “new” or “different”.

For me, this focus has always been flawed. Because “there is nothing new under the sun” (Ecclesiastes 1.9). In fact, according Christopher Booker’s opinion there are only 7 stories in the world. Ironically, even the idea of being “original” and breaking the boundaries of literature was tried and tested by the Alexandrian poets in the Hellenistic Era.

Originality does not have to be the pinnacle of what is great in this world. On the other end of the spectrum, medieval writers believed that “newness” had no credibility or weight. Similar was the mentality in the Renaissance period. A brilliant example is Shakespeare. I mean, everyone knows he didn’t write original stories, but pinched them from wherever he could find them (*shock, horror*). But does that make his work any less good? Does that somehow make him less of a genius? (if you answered yes to either of those question then I am disowning you as a banana lover). No- they are great stories because of the way he told them- the originality of the content is irrelevant.

What gives a story weight is its connection to the human experience and its place in the great tradition of literature. It is not its uniqueness that makes it special- but the age old truths that it reaffirms. That is why when I read a book series like Red Rising (did you really think I’d make it through a post without mentioning this series?) I do not see it as ripping off the Hunger Games or Homer, but rather paying homage to them and adding to the stories they were already telling.

Obviously, I am not talking about just plain stealing someone else’s ideas- because ripping off someone else’s story is not adding to the conversation. If anything straight up copying waters down powerful messages – such as in the dystopia craze, where the drive to create *new* worlds detracted from the usual political purpose of the genre. But that is another issue with the drive towards originality- the vehicle for delivering the message is hijacked and the whole purpose of the journey is lost.

So let’s not get bogged down in an impossible quest for originality- because really, all authors, whether they care to admit it or not, carry over their influences from every story they’ve ever heard and use them in their work. And that is something to be celebrated- not derided.

What do you think? Do you agree that originality is overrated or are you in the “originality is king” camp? I would love to hear your thoughts!

66 thoughts on “Originality is Overrated”