And they brought a storm with them. I swear, this episode will blow your socks off- in some instances quite literally.

Lots and lots and lots happened- I hardly know where to begin! In true Game of Thrones fashion, there was plenty of action, big reveals galore and some huge shocks! So if you want to shy away from those facts *now’s the time to stop reading* *Seriously, stop reading now!*

Because finally it has been proved that R + L =J!!! Who saw that coming? Okay everyone- but it was still spectacular to see years and years of speculation finally be confirmed. Jon is not just “a motherless bastard from the south”, as Littlefinger called him. In fact, if Lyanna married Rhaegar as many fans suspect, he’s not a bastard at all- but the true heir to the Iron Throne. In fact, he could very well be more important than that. Because now that this fan theory has been proved, the rest could follow like dominoes. As the literal embodiment of Ice and Fire, there is no doubt in my mind now that he is Azor Ahai and he weilds the power to defeat the Night’s King. 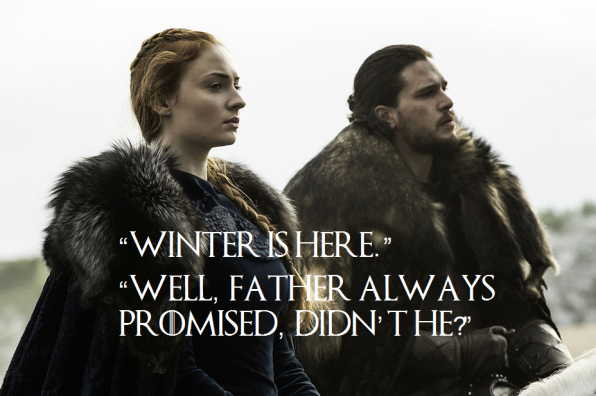 And while our attention is still on the North, one of my favourite scenes was the exchange between Jon and Sansa. Now while I loved their unity here, knowing Game of Thrones as I do, I have my fears that Jon saying that they need to trust each other is a signal that distrust lurks on the horizon. Considering how much Sansa has changed, I don’t doubt that she is capable of great and terrible things- I only hope Jon doesn’t get caught in the middle of whatever is going on between her and Littlefinger! I can only take heart at her saying “Only a fool trusts Littlefinger”. But let’s not forget…

The North certainly remembers- in fact this scene was so incredibly reminiscent of when the North declared its allegiance to Rob that I found myself tearing up. It was all incredibly moving and the Northerners showed their true calibre- especially the young bear (aka Miss Mormont- gosh I love that child!) Really though we know that Jon Snow is more than just THE KING IN THE NORTH. And speaking of new monarchs…

Okay- it seems a bit harsh to make a reference to Alanna from Tamora Pierce’s Song of the Lioness Quartet and Cersei Lannister in the same breath- but I hardly know how else to describe it. Cersei delivered a sublime bit of political manoeuvring.  In an unbelievable stroke of brilliance, she cut down the roses and used her little birds to kill the Sparrow. Marjery did show a certain amount of savviness in her last moments- but those were her last moments nonetheless- she was never a match for Cersei after all. Finally we saw that the lion still has claws. “A Lannister always pays his debts”- and goodness didn’t we get to see that was true in her scene with the Septa.

But in getting her vengeance, she lost the one thing left she truly cared about. Tommen had a bit of a fall from grace- yes I can joke about it; he’s been a bit of a crap character. Still, she’s got what she’s always wanted- she’s queen at last. In her own right.

I’m actually relieved for next season. Finally I feel like that we now have a good opponent for Dany to deal with. I worried that after half the kings and queens of Westeros were wiped out, the path to the Iron Throne would be clear. But looking at the creepy cult Cersei has built around her, I have no such fears. If anything I’m more afraid of the new Grand Maester (Just look at what he did to the old one!) And, just in case we don’t think there is enough to get on with next season, the brief interlude in Dorne set up all the big players looking forward to taking the lions down! Not least of all, Varys playing his hand and promising “fire and blood”. Make it rain Dany! Now that she has finally set sail, it’s as Tyrion says…

And while we’re making predictions about next season- since a male relative is destined to kill Cersei according to the prophecies in the books, I now believe that to be Jaime. Because that look in his eyes as she ascended the throne was not one of love. If/when she becomes a true tyrant, I have no doubt that he will be the one forced to take her down. Because he’s the kingkiller after all- he does what is necessary. 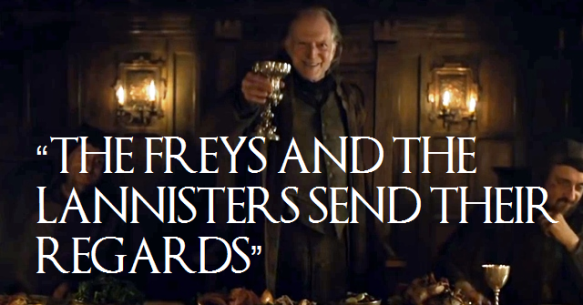 Speaking of Jaime- he made a very brief appearance in the episode. But when he did he proved again that he is a more noble man than most in an absolutely brilliant confrontation with Walder Fray. One of my absolutely favourite lines in that scene was when Walder said he wouldn’t kill the child because it would “give the family a bad name”- which I thought was hilarious, all things considered.

But of course that wasn’t the most significant scene involving Walder Fray. Because in a totally Tantalus move (yes, the Classics dork in me is making an appearance) Arya Stark literally fed him his own sons! It’s very poetic way to kill someone that broke the guest rights. It is the best way to punish him for killing his dinner guests. Frankly, if anyone had it coming, it was that slimeball Walder Fray.

In a scene to delight book lovers everywhere, Samwell Tarley had his Beauty and the Beast moment- and by that I mean he discovered the most incredible library in the world…

And that’s it- the end of another season. Time to get the violins out… And speaking of which, I have to say the thing I noticed most about last episode was the cinematography and in this episode it was how incredibly poignant the soundtrack was. It created the most incredible atmosphere and the perfect note to end the season. I adored it!

What did you think of all the incredible revelations and action this episode? Are you as distraught as I am about the series being over? How are you gonna survive until next season- I need tips!

10 thoughts on “The Winds of Winter Have Arrived…”