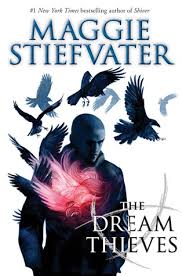 And by that I mean Ronan did. Because I am nothing if not predictable- and I will always, always fall for this kind of character. (Trying not to spoil anything, but failing, so minor spoiler warning– I have a thing for the tragic, gay characters- don’t know what it is, but they make my heart melt).

But aside from how much I adored Ronan, there were plenty of other things to admire here. The concept was seriously cool. I mean, it’s about people that steal things from dreams for crying out loud! I mentioned this to a friend of mine who doesn’t read YA and even they had to admit it sounded awesome. And that’s because it is. I rarely praise anything for being original- but I have to give Stiefvater kudos here- anyone that can come up with something new about dreamlore (yes, that’s a random thing I’m a fan of) has my vote. This concept created an edgy vibe that worked so well alongside discovering Ronan’s character.

But there were many other major pluses to this book- and I felt it was a definite improvement on the first one! I definitely preferred the antagonists- particularly the ominously named Grey Man- in this one. Unlike the first book, I got into this one straight away and flew through it. I also felt like I connected more with other characters and want to get to know them more. The twists and turns of the plot were ultimately so satisfying that I was left sated- and yet with a healthy appetite for more!

Right-y ho! Hope you all enjoyed that! Have you read this book? Did you enjoy it? Let me know in the comments!