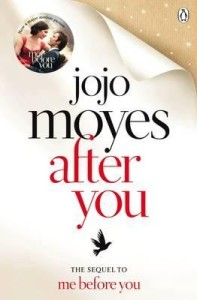 So it’s a few days after Valentine’s Day, so I feel like it’s safe to kvetch about a romantic book I didn’t enjoy: the utterly unnecessary sequel to Me Before You.

I have to say I almost dnf’d this at page 37. So far it had been pretty uneventful, I didn’t like the downbeat tone and then this sentence happened:

“Now, when I read newspaper stories about the bank teller who had stolen a fortune, the woman who had killed her child, the sibling who had disappeared, I found myself not shuddering in horror, as I once might have, but wondering instead at the story that hadn’t made it into black and white.”

So there’s a nice bit of moralising that wasn’t in the first one- let’s break down everything that’s wrong with this statement:

Now I’d like to say that after this the book got better, but the plot of this was a hot mess (just like the main character). I mean, really- I felt like the story had ended at page 300– I was like “well that’s that then”. But it just kept going and going and… *spoiler alert* all that happened in this book was for the mc to end up back where she started, about to jet off somewhere else, moving on and living life.

If you’ve read the first one, you’ll know it had no need for sexual coercion, weird confrontations, dramatic accidents and shootouts because it was all about the people. But here the people and their relationships were left behind. I didn’t feel connected to the romance in the same way. I didn’t like or dislike the characters- I just didn’t care. Not even about the protagonist, Lou.

Obviously I get that she was a hot mess- I mean grief can do that to you. But the thing I had liked about her was her bubbly, quirky personality- which was completely gone in this book- it just didn’t feel like the same person.  And that was ultimately my biggest problem here- it could have been a separate story about entirely different people. The author easily could’ve left well enough alone- just like I should’ve.

54 thoughts on “After You… There Was No Point To Anything”