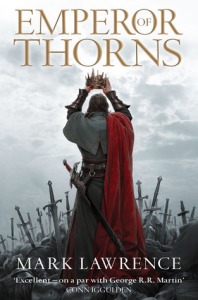 I’m an endings person. I’ve mentioned this before- I’ve always thought there’s no point starting well and ending badly. That cathartic chord of a well struck conclusion is where it’s at for me. And I’m not the only one that thinks this- series are often judged on their endings- so there was a lot of pressure for this book, the last in a so-far excellent series, to deliver that perfect final note.

And boy- what an ending this was! To say that the tempo was raised in this book would be an understatement. So far the journey had been mental, but even then there was no way to see where the road was heading. The direction it took was on another plain (quite literally- it is fantasy after all). With more than one twist of the knife, this story skewered my heart and dragged it up through my throat. Every wild turn gave me palpitations. Lawrence said in the afterword that he wanted to end this series on a high- and by god did he do that. (And by high I mean: mind-blowingly, soul-crushingly good)

As you all know by this stage, I love Jorgy. But what was a marvellous addition to this book was having sections dedicated to the villainous Chella. Yes, that’s right, this book has villains to offset its anti-heroes. It added another dimension to the book.

“The scars of the briar mark me, a calligraphy of violence a message blood-writ, requiring a lifetime to translate”

“Careless words scattered like broken glass for the Brettan to pick a path through. Chella came to Kai’s aid before he cut himself”

I mean that just speaks for itself!!

Do you like this series? Are you planning on picking it up? And which book do you reckon ended especially well? Let me know in the comments?

38 thoughts on “Emperor of Thorns Was a Sharp One”