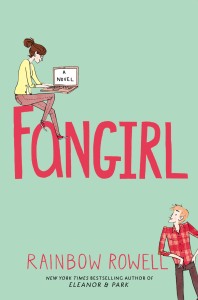 Going into this, I will admit I didn’t think it would be my thing. Don’t get me wrong, I have my fangirling moments, but I’ve never written fanfic, engaged in it or been properly part of any fandom. So when I heard of Fangirl, a book ostensibly about fanfiction, years ago, I just put it aside as “not for me”. That was until I read Rowell’s Carry On. In the end, rather poetically, my fangirling for that book pushed me to give this a go- and I’m glad it did!

To start with, like all of Rowell’s books, this was a perfect blend of wit and heart. I will be the first to admit that the plot was not all that exciting- but it’s not that kind of book. It’s more the sort of story where the characters take you by the hand and lead you through their world. You get to know them and you fall in love along with them.

And let’s face it: the romance is what you’re here for. It didn’t disappoint. Levi made me smile stupidly every time he talked or turned up. And, of course, any hint of Baz and Simon scenes and I’m gonna be right there- cheering it on! The interspersing of their story into the plot, while not for everyone, was just the dose of warm fuzzies that I needed.

Of course, it was also incredibly relatable. The love of books (even if they’re not real books) came across brilliantly. And while I think that everyone has their own style, so the descriptions of writing aren’t entirely universal, I did enjoy those parts too.

However, this subject also brought up the biggest problems for me. Because Rowell did bring up the question of fanfic and plagiarism in quite an awkward way. I might offend some people here, but there is an issue with repurposing someone else’s work for uni, and I don’t think that Cathy totally got that. The professor’s view was just seen as a bit old fashioned- when in reality universities have to be strict about plagiarism and you can’t use someone else’s work for profit (yes grades count). None of this was addressed. To top it off, there was another character who stole some writing and this was seen as categorically not okay (because it isn’t). It just felt like a bit of a double standard and, considering the juxtaposition of these two ideas, I don’t know why the main character didn’t consider comparing the two incidents. What was even more frustrating is that it was left pretty open ended and I never felt like this issue was actually resolved.

It left me thinking that this had never really been a plot point anyway… which brings me back to the fact that there really is very little in terms of story beyond the romance and relationships. In the end, issues like this receded to background noise. Even the “small matter” of finding oneself didn’t end up as being as important as finding a boyfriend. Ultimately that was enough for me and I found it an enjoyable read, though perhaps not something to go crazy over.

Have you read this? What did you think of it? Let me know in the comments!

48 thoughts on “Fangirling Over Fangirl (Mostly)”