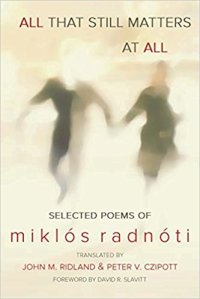 I don’t normally review poetry- indeed I don’t normally read whole poetry collections cover to cover. But this book was special. Part of that was due to the complex story of the man behind them- Miklós Radnóti- a Hungarian poet murdered in the Holocaust.

There are many strands of his life story tangled up with his writing: the death of his mother and twin at his birth, his wife and muse Fanni, and his conversion to Christianity (sadly even this could not save him from the labour camps). Add to that the fact that these poems were recovered from a notebook found on his exhumed body and it feels like these words are speaking from beyond the grave.

Through the themes of death and war, this book speaks to the depths of humanity. Burdened with survivor’s guilt from his tragic origins, he paints himself as an anti-hero, a “beast of humankind”. In this way, the image of his twin reflects more than just a single tragedy- it recognises the duality of the human race and the capacity within us all for good and evil.

“the dusk moth will hover already and its wings sparkle silver”

One of the striking elements of these poems is when he harks back to the Ecologues, imagining a conversation with Virgil, where he discusses the madness of the age. With this time travelling exercise he creates a bridge between past and present in a way that even he could not have considered. For in the very last line of this collection, we are inadvertently reminded that his words reach out even after his death:

“on my ear the muddied blood was caking”

A brief, yet impactful read, there were so many wonderful poems here that if I wanted to list my favourites I would be giving you half the contents page.  Instead I will leave you with one last line from this beautiful collection:

“The dusk was copper-skinned/and death was heroic”

So will you give this a go? And do you have any poetry collections you can recommend me? Let me know in the comments!

27 thoughts on “All That Still Matters At All: A Voice that Deserves to be Heard”