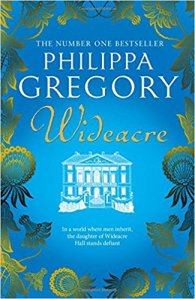 Well this was one of the weirdest books I’ve ever read…. I went into this book with a little mild trepidation because I’m not a total fan of Philippa Gregory (her books take wayyy too many liberties with history) and I don’t always see eye to eye on books with the friend who recommended this to me. When I finished my reaction was pretty much:

How to describe it?! At first glance this is just an innocent, evocative, highly descriptive narrative. It was compellingly written and I was intrigued to see where it was going. There were hints of seedy goings on, but the dirty deeds were at least vaguely understandable. And then, all too quickly, the plot started to get fucked up. To put it delicately: this was Flowers in the Attic meets 18th century aristocracy (except without the child abuse, so there’s no reason for the story to happen). Yeahhh it went the incest route. Gross.

And still I kept reading. Partly I’m just a masochist: finishing dreadful books so I can rant on here is what I do with my spare time apparently… But also because all the petty craziness and dastardly schemes kept pushing me towards the finish line. I felt almost as if I could trace the normal, sane book in it. Maybe somewhere in there, lost under all the icky bits was something akin to a Peyton book (one can live in hope- though I really should have learnt my lesson from reading Lolita that no amount of pretty writing can save a book like this).

I’m gonna be blunt: I think modern feminist attitudes will blind readers from the fact that the main character is LEGIT INSANE. Because the whole motivation for Beatrice, the main character, acting like such a deranged lunatic, is that she’s been oppressed by patriarchal society and is not getting her due. However, the premise this rests on is flimsy at best because she’s  a) not the oldest child b) not even good at running the land when she does get to and c) does everything based on emotion while claiming to be intelligent (so intelligent she needs to be the one to get the land). I can’t even see why an uber feminist would like this, since, even if you overlook her murderous tendencies, she is so totally useless and therefore a poor representation of girl power.

I didn’t even get why she was so attached to the land anyway. She just had an *everything the light touches* moment and that was it, she was sold. Never mind that she could have just grown up, married someone in the area and lived nearby. Or here’s a crazy idea: she could have just got over it. I think the author got it spot on in the preface when she wrote: No one like Beatrice ever existed or could ever have existed. Too damn right- no one could have been that stupid.  I mean pfff I know it’s a bit out there- but maybe (and I’m gonna put a spoiler in cos you shouldn’t read this damn book) killing your dear old dad, who you love, is not the best option when you’re worried about your inheritance. Maybe, just maybe moving house is less of an upheaval. But what do I know… I’m not a super-rich aristocrat (well, at least according to the classy author this is how all rich people behave)

But the murder is not the only way the plot leans on stupid ideas. Another spoiler (are you still planning on reading this though?!) but it doesn’t make sense that her nemesis, Ralph survives being fed to a man trap (one of those contraptions designed to stop men poaching). He basically got ripped in two and this is the 18th century with NO MODERN MEDICINE. But ho hum, there couldn’t have been a plot twist without the legless Ralph (also a bad name for a “villain”- it reminds me of that cuddly character off the Simpsons and hardly inspires fear) from coming back from the dead.

Mostly however the sheer stupidity of this book rests on the shoulders of the main character. Not just in the way that she behaves, but in her construction. I mean her schemes are so goddamn *dumb*. She’s supposed to be cunning, but a friggin molerat in a normal story could have seen through her plans (it’s at this point in shitty books where I start to question e-v-e-r-y-t-h-i-n-g: like why  do none of the characters have even an iota of intelligence, have I ever written anything as daft as this cos I may as well just throw in the towel if I have and is the sky even blue anymore?). I think the only idea in here that didn’t make me cringe was when she tricked Celia– which worked because Celia was ridiculously over sweet. That said, every-other-scheme only worked because everyone else acted like an *idiot*.

And if a smart character being stupid was the only inconsistency that would have been bad enough… but I also had trouble pinning down her age. I can’t tell you how many times I thought “wait- she’s supposed to be a teenager?” This does not sound like someone who is a clever sixteen- she just sounds over thirty. I had to suspend my disbelief for pretty much the entire book.

Well that was when it wasn’t making me feel physically sick. Because this main character is poisonous enough to rival even Humbert Humbert- and that’s saying something! It wasn’t just the murder or the incest (though bloody hell- when I write it like that- it’s certainly bad enough!) it was also watching her ruin people. That actually managed to be the worst part of it for me- seeing the consequences for everyone else. She’s one of the most disgusting characters I’ve ever had the displeasure of reading about. I can’t even say it was fun to read about such a villain because there was no legitimate reason for her to act like such a crazy bitch. She just reminded me of a spoilt brat throwing her toys out of the pram.

And by the end I was left with the same questions I had at the start: What the hell is the meaning of this story? Should she have never sat on a horse and acted like a man? What is the point of all this? Why write this? I didn’t get this book at all– a line I often reserve for some highbrow books- but trust me this is as low as it gets.

Rating… arghhh… how is an ape supposed to rate a book like this? It’s the wrong kind of bananas! Here’s a handful of measly peanuts instead:

So have you read this? Will you… pahahaha… let’s not even pretend you’re gonna pick it up… Don’t do that to yourself. Seriously.