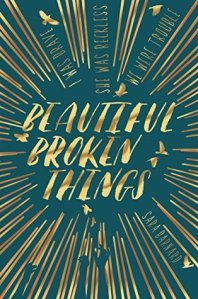 This is the story of how everything went wrong. First of all, I went to the library to pick up another book by the author- yet for some unexplained reason this book was there in its stead. Then, I read the book… gah- well you’ll all get to hear more about what I thought about that in a minute. Finally I came to write the review… annnd I lost my notes. So nothing’s really gone right with this book, but that’s okay we’ll improvise!

Starting out with Beautiful Broken Things, I knew right away that this book and I were going to have problems. It quickly became apparent that the style was childish and the author had chosen to integrate irrelevant text conversations into the narrative… not good. All the quirky formatting and the constant intrusion of social media did nothing for me. In fact, it made the story feel even more mundane than I was already suspecting it would be.

Because my goodness, way too much of the subject matter was inane-it was like getting stuck on the train without headphones and being unable to tune out a grating, trivial conversation.  I know we praise books for being “real” but there is a limit to how much I want a book to resemble reality. When it feels this uninteresting, it no longer feels like literature, but rather one of those transcripts taken to observe an accent for a historical record.

And so I cannot say this book was unrealistic. Nor was it an entirely inaccurate portrayal of mental illness, which will no doubt have many people reaching for it (since that’s the hot topic of the day). BUT hold your horses. I will not pretend to favour books which are designed to be educational over those that are artistic when dealing with this topic, yet when books are designed to be educational (as I would classify this book) I would hope that they would tread carefully. Unfortunately, I did not think this book would be a good educational tool since along with the truths it uttered, it wound in so much pseudo-science nonsense.

A little truth can be a dangerous thing and when reading this book, I couldn’t help but feel like this would serve as more of a “how to self-destruct” guide, especially considering the over-sensationalised ending. I am loathe to tell people what they should and shouldn’t read- not least cos people will immediately run away and do the opposite. But, and I rarely if ever say this, I do not see how this can be a healthy read. I would not give this to teenagers- I honestly do not believe it is appropriate. All I can praise with regards to how it deals with mental health is the list of charities at the end.

Add to that a truly detestable main character, who undermines all of the logic in the book, and this was not a worthwhile reading experience for me. Honestly, I found her to be a totally spoilt weirdo, who was so obsessed with courting drama that she somehow takes a traumatised classmate under her wing… by being a total bitch to her (see what I mean about lacking logic!?!) I did think it was clever to present the book from her perspective, because it did highlight the idea that someone can appear to be functioning just fine to an outsider, and that you never know what’s going on behind closed doors. Like I said, there were the occasional messages that hit the right spot- it’s just a shame most of it missed by miles.

So have you read this? Will you read it? Let me know in the comments!

40 thoughts on “The Ugly Truth About Beautiful Broken Things”