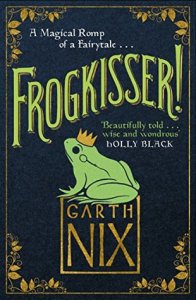 Frogkisser!– this was as fun a romp as you would expect from that title. I did enjoy this one, though I was more conscious than usual that this was outside my age range- I can hardly blame the book for being juvenile when I’m reading Middle Grade in my 20s. That said, I do always feel like I have to read everything Garth Nix writes at this point… so really it’s his fault for hooking me on his work 😉

Because You’ll Never Meet Me– I’m really excited to talk about this one. I was recommended this underrated gem by Sam @Rivermoose (her blog is awesome- check her out!!) and I was instantly drawn to the intriguing premise, where two people who have strange medical conditions, basically making them allergic to each other, become best friends (I know- it’s so unique!). What makes this story special is how the characters give each other the things they’re lacking. And not insubstantial things- one is blind and gets to see through the other’s eyes, the other gets to hear things he never would with his condition. The only reason I had to dock a banana is that I didn’t like Ollie’s voice much-I thought he was a bit rambly (and was somewhat generously described as good storytelling). That said, it was really well written in general and the message of giving and friendship is powerful stuff. Highly recommend.

Our Dark Duet– Okay, so this was one of my most anticipated books of the year… and I ended up disappointed. My main issue was that it felt like a sloppy conclusion and a rush to the end. There was the old villain, Sloan, who was made to feel like a second fiddle to a new villain, the Chaos Eater, who was shoehorned in (rather unnecessarily) to do a lot of damage and then get defeated. And then there was the fact that I felt like I’d lost my connection with the characters: August fell a little flat and Kate seemed wildly different from what I’d remembered. Because of that, the impact of the ending didn’t hit for me- I could see it was good and dramatic and should have been emotionally powerful… and yet I felt nothing. In fact the strongest emotion this book got out of me was a mild case of befuddlement- there was that use of the “them” pronoun for one character, and even if the gender ideologues want to get mad at me, that confused the shit out of me purely from a linguistic perspective. That said, the rest of the writing was the star of the book for me and was the only reason why I didn’t give this an even lower rating.

So have you read any of these? What did you think of them? Let me know in the comments!