But it was still pretty original! I’m back today with a review for the second book in the Replica duology- a story about clones… (ooh err… scary stuff!) And as with the review for Replica, I’m joined by my sister the Monkey Baby! (and if you don’t know already, she’s even more bananas than I am) 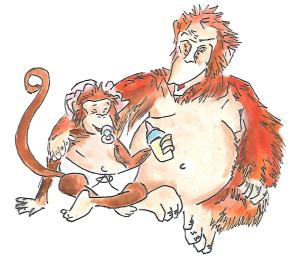 See what I mean? Bit of a “you say goodbye, I say hello” moment if you ask me, moving onto the review… It took me a bit longer to get into this one, because it started in the middle of the action and then tracked back. It made the chronology a tad confusing and meant it took quite a bit of time to settle into it. But once it got going it was amazing again. It was so so action packed- even more than the first one.

Monkey Baby: I’m on a tightrope with this point. This monkey found it crazy disorientating.

There were a ridiculous number of twists and turns. I did feel like a fair number of the reveals and twists weren’t as good as the first book, simply because they’d already come up before, or were hinted at heavily, yet were treated like they were a big surprise. Also, although the number of twists did make it feel more action packed than Replica, the downside was that it also felt rather disjointed because of all the stuff that was going on.

Monkey Baby: It was bananas on a rollercoaster taking off in a rocket!!!

Nicely summarised! This was made especially jarring because there were two narratives going on independently. Whereas in the first book there was more of an overlap, here it felt like it easily could have been two books, as they didn’t join up nicely until the end.

Monkey Baby: One book? What monkey told you that? It was two you silly banana, obviously 😉

Monkey Baby: Lyra’s my baby and Gemma is the pretty kitty.

*Chokes on tea*- what she said. There were still layers to the story, as you’d expect from a story with dual perspectives 😉 I appreciated the modern day Frankenstein feel, although it was less pronounced in Ringer. There’s some really beautiful writing on top of that. Basically it’s a very clever series.

Monkey Baby: Layers and layers. Mmm I’m going to eat that cake forever. It was very delicious. Well maybe not forever. Forever is too long for a baby…

Forever is an awfully long time… And speaking of forever, this book was kind of ambiguous with its conclusion. As with the last book, I kind of think this is the end, but is it?

Monkey Baby: YES!! IT IS! No no more! LEAVE IT IN PEACE! HOW DARE YOU SUGGEST THAT! NOOOOOOOOOO

Okay, so Monkey Baby’s pretty passionate about this staying as a duology, so that settles it.

So have you read this? Do you plan to? Let me and the Monkey Baby know in the comments!

47 thoughts on “Ringer Did Not Quite Replicate Replica…”