So in case you don’t know, I’ve pressed pause on the favourite classics list for now, but the whole process of doing that has got me thinking. Especially since there were a ton of books I put on the list and then took off the list- it was a bit of a hokey pokey process 😉 I kept trying to select the absolute best ones by any given author, otherwise it’d just be a never ending list. One of the more difficult ones for me to decide over was Austen because I actually adore 5/6 of her books… so how did I choose between them?! Well, that’s why I thought it might be fun to talk about them all (and yes, I know I’ve talked about the top two recently, but you can never talk about Austen too much!)

This post was inspired by the absolutely lovely Katie @Never Not Reading, who came up with this awesome idea a few months ago and who has the most *incredible*, interesting, thought provoking content. She’s currently on maternity leave (MASSIVE CONGRATS to her and her whole family 😀 ) but that is *no excuse* not to check out her blog- I guarantee you won’t be disappointed! Her blog is one of my favourites!!

And of course I loved her post on this! The thing that excites me about everyone’s preferences when it comes to Austen is that no matter who you talk to, no one seems to have the exact same order- which makes it such a fun thing to do! Let’s get to my ranking:

Emma– ahh it can hardly surprise anyone, given the number of times I’ve cited this as the perfect book 😉 I’m gonna be brief, I’m into everything about this book: the wit, the character growth, the romance- it all makes me swoon 😀 Plus, it’s kinda fitting for this to be my number one since it’s the book that made me fall for Austen in the first place. Although in fairness, depending on my mood, you could switch it out for… 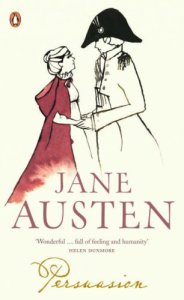 Persuasion– yup, there’s loads of times this has been my number one Austen- the romance is so intense in this one! As I’ve mentioned before, the love in this gets me all sappy, because dammit they’re still in love after all this time and ISN’T THAT JUST THE SWEETEST! *Ahem, regains cool*- I also have a great respect for the heroine- she’s kind, without being a total pushover (*cough* like some other characters I will mention… *cough cough*) But yeah, I’ll summarise my feelings about this book thusly: squeeeeeeee!!!

Pride and Prejudice– *confession*- the first time I read this, I wasn’t especially taken with it (I was a bit young and I don’t think I picked up on the irony) then I got set it as one of my AS texts and just *groans all round*. At least, that was my initial reaction- before I reread it, I picked up Emma and fell in love with that… so much to my surprise, when I reread this I fell in love with it too! Now I adore everything about this book and will happily reread it any time 😀 So moral of the story, I can change my mind about books 😉 (although I can’t think of anything else I’ve drastically changed my mind about since then 😉 )

Northanger Abbey– it feels so wrong putting this fourth on the list given how much I love it. I do hover about whether I put this ahead of Pride and Prejudice *all the time*. It’s such a romantic book- and hilarious at the same time! I also think the parodic elements get funnier with every gothic book I read.

Sense and Sensibility– again, I really enjoyed this one, so don’t assume I’m putting it at number 5 on the list for any other reason than I like the other ones slightly more. Like Pride and Prejudice, it has strong sisterhood themes and I was definitely into the relationship drama. 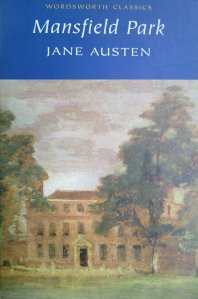 Mansfield Park– okay, I’m not going to make any excuses about putting this last- quite simply, it’s the only one I dislike. Fanny’s a drip and the relationship’s incestuous- I actually was rooting for her to end up with the Mr-Wickham-stand-in (is it obvious I’ve not read this in a while?) I am actually tempted to reread it and see if I still hate Fanny just as much (plus I did just go on about giving Pride and Prejudice another chance)… but also really can’t be bothered because there really wasn’t anything I enjoyed about this one- sorry!

What I learnt just then was that ranking Austen is HARD! Honestly the first four often end up in different positions, so this doesn’t even feel definitive. Anyhoo, do you like Austen? What’s your ranking? Let me know in the comments!

128 thoughts on “My Austen Rankings – Inspired by Never Not Reading”