Hello all! I’m back with my second instalment of my Game of Thrones series review! If you missed last week’s, you can catch up here. 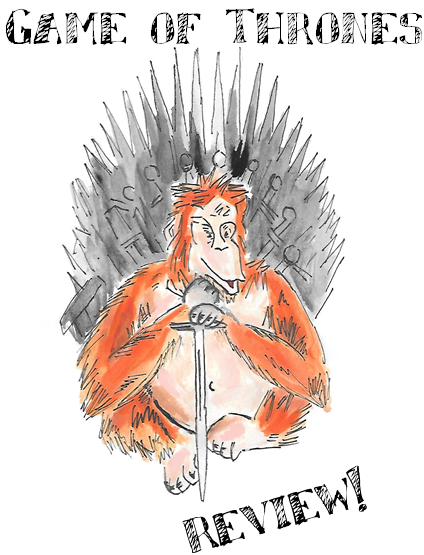 I will admit, rewatching Game of Thrones, I forgot how dark the show was. I guess with the more fantastical, hopeful aspects of the later series, it had slipped my mind. These early stories are all “out of the frying pan and into the fire”. There’s harrowing scenes littered throughout, including the murder of all Robert’s bastard children and Bran’s visions of death. At the same time, there’s grim visual settings, like the Red Waste, Harrenhal and the Garden of Bones. And of course, we get our first look at the army of the dead. While I rarely think of season 2 as the most memorable, there’s certainly a lot to it. 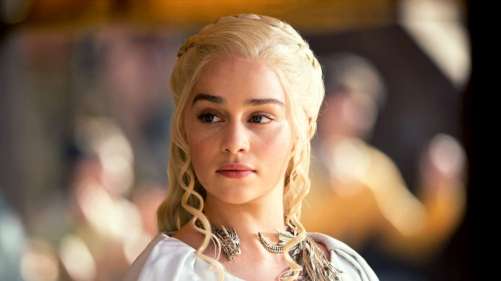 One of the best pieces of imagery that ties the whole first episode together is the red comet and as we’re told it “means one thing- dragons”. I love how this again hints at the connection Dany has to all of Westeros, even in exile. This is of course the cue for Daenerys “Where’s my dragons?” Targaryen. Of course this is the season where she comes into her own as the mother of dragons. It is a season where she has to make difficult choices and sacrifices– so well exemplified by her vision of the throne room covered in ice (not so subtle foreshadowing) where she must leave behind the dream of her husband and child, as life calls her back. And that call is of her baby dragons who need their mother.

She doesn’t have a whole lot of power to begin with, exemplified by her ragged appearance at the gates of Qarth, yet she becomes even more queenly than the previous season. Perhaps it is because even borne so low, she never loses that regal quality. I think this is one of my high points for Dany, because even with so little, she has such a commanding presence in this series.

However, she does some shall-we-say morally ambiguous things in this season too– namely locking the scum who betrayed her in a vault to die. *Ahem*, yeah, I know it’s wrong, but I can’t say I blame her for that one. It does however act as a precursor for some of her more dubious actions later on. 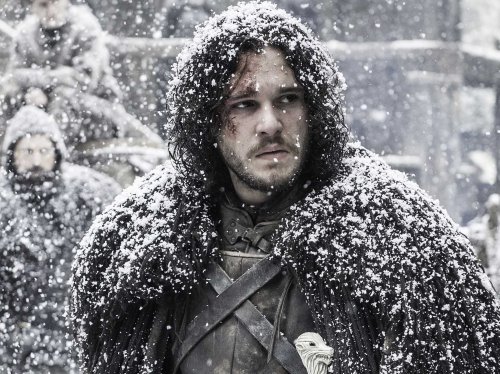 I feel sorry for Jon in this (and every) series- I mean he was made to stand out- he’s sharp and has a strong moral compass regarding Craster’s sons- but he’s constantly pushed into the shadows and told to shut up. However: “You want to lead one day, then learn how to follow” is good advice for all the would-be leaders on the show. Highlight for season 7 spoilers: It kinda makes me more forgiving of him bending the knee to Dany, only I wish it hadn’t been one sides and wish they had pledged themselves to each other instead.

Speaking of humility- it turns out that what our hero needed was a wildling girl to tell him “You know nothing Jon Snow”. And as a major plus, he gets one of the best love stories in the show, because Ygritte is simply awesome- SO CHEER UP JON! (alright spoilers, but given how that one turns out, I can’t blame him for pouting there)

He does also have tough challenges like killing Qhorin Halfhand- but he steps up and actually does it- showing not for the last time that he is not a Stark (truthfully, I’ve no idea if the Starks are capable of that, but it’s an interesting question). Personally I think this shows he has both honour and wit.

Moving on to someone who has neither of those… 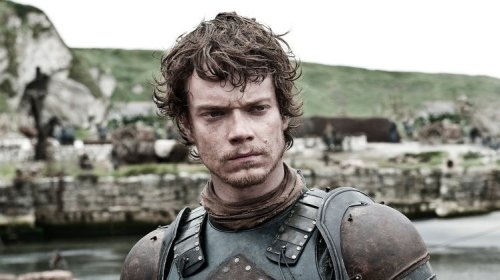 WTF Theon?! Why are you so thick!! Sorry, had to get that out my system. He makes *the worst* decisions this series. It’s bad enough that he decides to switch sides in the war, making him a traitor (though I guess one could argue he was a traitor to his own house before) still, on top of that, he gets a very simple task and effs it up. I mean, I’m hardly condoning the notion of “paying the Iron price”- yet does he really think people need moral support in reeving and raping? Really?! He’s trying to play this honourable leader figure to people whose main purpose in life is to raid and pillage. Plus he gets good advice from people like Yara and Maister Lewin annnd he totally ignores it.

There’s also a ton of things he shouldn’t have said this season:

Okay, I know I’m being excessively harsh, but he did betray his friends, murder two innocent children and a shit ton of other things. My sympathy for Theon at this point in the story was at rock bottom. 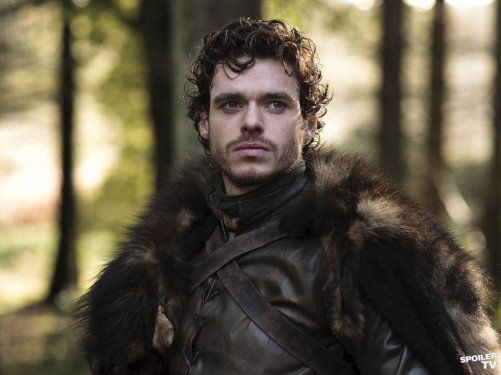 Ahh poor Robb, a great military leader, but OH MY GOODNESS he makes *so many* mistakes. Let’s go through them shall we:

Honestly, I don’t know if my suggestions would have made things better, it’s just speculation on my part, but I think we can all be certain (knowing the events of season 3) IT COULDN’T HAVE BEEN MUCH WORSE. I feel like this entire season is laying groundwork for the catastrophes that are to come. Yet, if you think I’m letting Cat off the hook for her part, you have another thing coming… 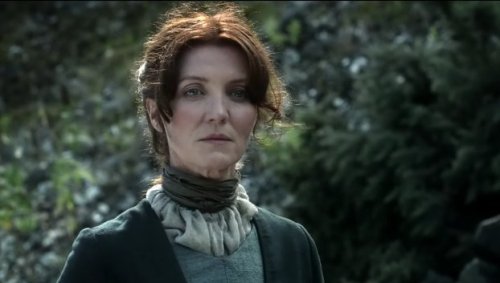 Now I’ve already said that I think there was an option for a prisoner swap (actually, I didn’t mention this last time, but there’s a lot of times when she’s partially right- still she only ever gives enough advice to have leeway to say “I told you so”, never mind that the other half of her advice is always godawful). *However* swapping the Kingslayer for two girls had to come with more provisos- aka money and peace. Yet, Cat’s still got her eye on revenge, when she should be taking in the whole bloody picture.

Again, her negotiation style leaves a lot to be desired– how can you say to two grown men who call themselves kings “I’ll knock your heads together”? Really, Cat? Thanks for your oh-so-helpful input. But if you want to talk about non-negotiations- letting Jaime go in exchange for his word is INSANE! If you really believe the Lannisters are the villains you say they are- then what the hell are you thinking?!? 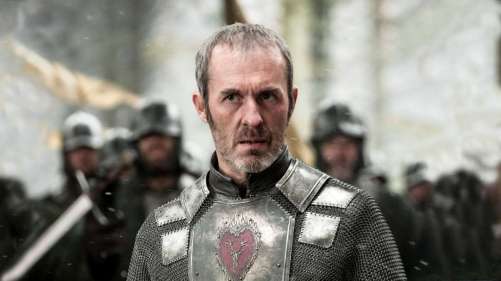 From one awful character to another- and I’m not just talking about Stannis. I’m of course referring to the Red Woman. She’s one of the most evil characters in the show- and that’s saying something! She kills people for no reason and says charming things like “You will betray everything you once held dear”- good pep talk I guess? She also is a bit of a fraud- I mean, she had to know sticking a random sword in a fire wasn’t going to make it Lightbringer- or is she a fool? It’s a possibility, since her catchphrase is “the night is dark and full of terrors” and doesn’t realise she’s evil.

Not to say that Stannis isn’t awful too. Let’s discuss some of the things he does wrong:

So yeah, not a fan of Stannis. There was a point later when I almost liked him, but that’s a story for another post.  The Onion Knight is awesome though. 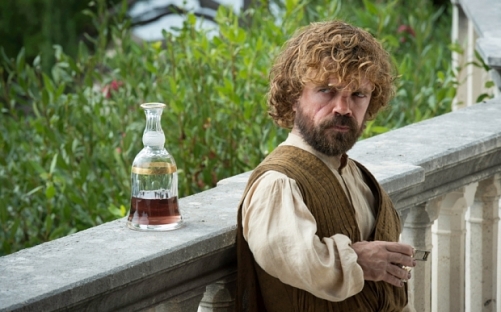 On the other side of the Battle of Blackwater, Tyrion gets the chance to shine and boy does he LIGHT IT UP WITH DRAGONFIRE BABY! Okay, I’m getting carried away, but this is one of Tyrion’s best moments. He shows he’s a master manipulator and the best Hand of the King. He manages to get Varys on side, use Littlefinger and expose treacherous Maester Pycelle. He also blackmails Lancel to spy on Cersei and puts Joffrey in his place. All whilst looking out for people like Sansa. 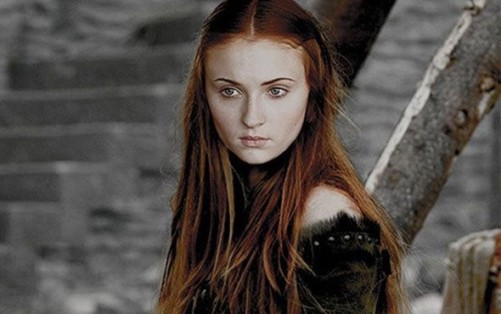 Poor Sansa has a crap time of it this season. Cersei and her monstrous son take full advantage of her vulnerability. I did have one criticism for her this season in that I always thought she should have had courage to go with the Hound– she knew he’d protect her and frankly even if Stannis had won the battle, she’d have just flitted from one cage to another. BUT I did appreciate some of the smart things she did, like how her quick thinking saves Ser Dontos from being murdered and how she plays her part very well when she’s released from her engagement. 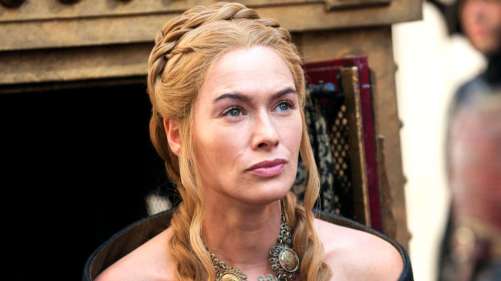 With more freedom afforded her, we get to know Cersei better this season. Her saying “love no one but your children” to Sansa sums her up completely. There’s interesting elements in Cersei developing Joffrey’s sadistic stupidity (both this season and the last filling his head up with arrogance and idiocy). However, I appreciated seeing Blackwater from her personal angle. When I think of season 2, I often get images of her, entertaining the frightened hens of her court, getting drunk, wishing she could be a part of the man’s world and having the only courage afforded to her, waiting on the throne with Tommen as the battle rages. Sure, she does terrible things and she’s not that smart (calling Joffrey away from the battle kills morale) but I can’t deny there’s something very iconic and human about her on the brink of taking her own life, telling a story, with the notes of Rains of Castamere starting up in the background.

Now I would be remiss to not to talk of another strong female character. With her sharpened wits and her little blade, she begins her adventure with Jacquen. Well, I use the term “adventure” very loosely. She watches people get murdered, tortured and everything in between. There’s a very poignant scene when she asks “how do you sleep?” And with everything she’s seen, it’s no wonder she has trouble. Yet she does not let that deter her, constructing a scheme to help her and her friends escape the horrific Harrenhal.

One of the best things about this season is her interactions with Tywin. I know this is fictionalised for the show, yet it works so well. And of course, I haven’t had time to talk about Tywin in either of these reviews, but let’s just say, I think the character, introduced last season symbolically skinning a deer, is enigmatic.

So how did you feel about season 2? What did you all think of some of the character decisions? In particular, what do you think about my alternative Robb Stark strategies- yay or nay? I’m open to hearing all your suggestions!