*Proofs and other items received in exchange for promo post*

A while back I did an ARC review for Renegades– a superfun superhero book that plays with the Good vs Evil dynamic! On one side is the ever-so-just Renegades; on the other the allegedly evil Anarchists. In honour of the publication day (*today*) Macmillan kindly offered to send me some proofs and goodies, to pair up with a friend and discuss which is better JUSTICE OR ANARCHY. And, well, I thought that was a supercool idea 😉 So thank you to the lovely people over at Macmillan for this! 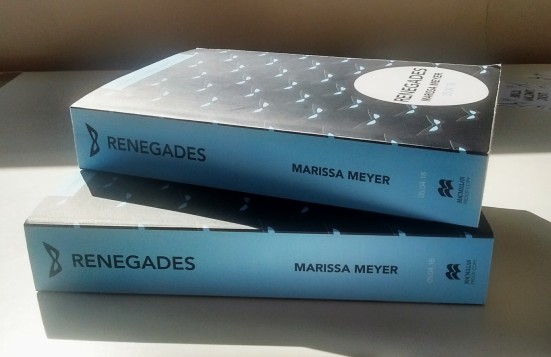 I decided to team up with my sister, the Monkey Baby, who read and loved the book. So today she’s back on my blog to tell us which side she prefers! After all, what’s better than a healthy bit of sisterly rivalry?

Monkey Baby: MWHAHACHI!!!!!!! 🙂 I chose…… RENEGADES!!! THEY’RE THE BEST IN THE WHOLE ENTIRE UNIVERSE!! MORE THAN THE UNIVERSE!!! 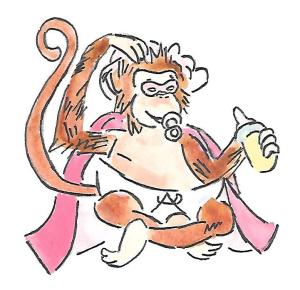 Me: Which was convenient for me, because I’m team Anarchist!! (c’mon if I can pick Loki as my favourite Avenger, I’m naturally going to pick the “baddies” when both sides are morally dubious 😉 )

Monkey Baby: Don’t be a Schmuck!!  The Renegades have the coolest gadgets and the Anarchists are EVIL!!!!! They’re the goodies!!! Captain Chromium and the Dread Warden are so sweet. They will see right in the end and everything will work out perfectly. You can’t trust the villains!!! Just look at Ingrid!!!!!

Me: Yes typically speaking I’d say they’re a bit extreme 😉 HOWEVER so are the Renegades- they pretty much exemplify what happens when the ruling elite focus too much on orderliness aka they basically become authoritarian. Aside from the fact that I can’t help rooting for the underdog, the Anarchists have a point and are right to oppose them (even if their methods aren’t ideal). Considering everything the Renegades plan to do, I’m not so sure they’re the good guys…

Monkey Baby: But Adrian will turn them into being beautifully upstanding citizens because he has a big open heart and will listen to advice whereas the Anarchists will blow everything  up. I mean c’mon they’re already saving the planet worldwide with all their cool superheroey goodness. And Adrian…. Just Adrian…..mnmmm mmmmmmm…

Me: ahh I may not have a musical number to back it up, but I prefer Nova- I mean, she is Nightmare! Could you think of more of a badass female character? She may not be as mushy as Adrian, but she has a heart! And sure, Adrian may have the power to draw anything into existence, but she’s taught herself how to do loads of cool things, and I always have a soft spot for heroes that make themselves what they are… although she’s technically a villain…

Me: Or you know, we could work together.

And on that note, this is available *now* on Amazon UK and US.

So who would you choose? Renegades or Anarchists? Let me know in the comments!

66 thoughts on “Renegades VS Anarchists! Who do you choose?”