Well hello! This is me coming at you live for the first time in weeks and I gotta admit it feels a little strange- I’m pretty out of practice I guess. But I thought you ought to know, from the monkey’s mouth, I’M ALIVE (not much of a drama queen, am I?) Anyhoo, you might have noticed that I had a lot of content up after my whole “I’m off” post, partly cos I had a lot of reviews to catch up on, although mostly cos I stress blogged before I left. Now though, I’m pretty busy (I promise to give details when I’m done) and *shock horror* haven’t been reading much 😦 I still have plenty of ideas for content, yet I’ve decided to take a proper break while I try to figure out a schedule for when I can post… so bear with me! Okey dokey, preamble aside, I have only two books to review for July: 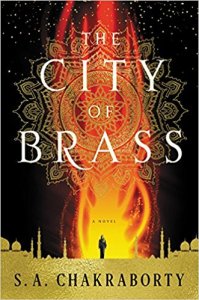 City of Brass– I really wanted to like this a lot more, but this got far too confusing and felt overlong. There was just so much information flying about over warring tribes and I struggled to keep up with the overload of world building- which was an especial pity, because a lot of that was beautifully written. I still ended up with way too many (irrelevant to the plot) questions like “why do they hate each other again and what the hell is going on?” And when I couldn’t connect this with the overall story, I wondered why it was included at all. Too much of the plot felt meandering anyway and that didn’t help. Nahri, the main character, initially delighted me with her antics and trickster charade… but all too soon it transpired it was little more than an act, for I couldn’t connect this character with her later impossibly innocent nature. As for the other lead, Ali didn’t grab my attention and was lost for way too much of his narrative. Again, we’re told he’s this pious and it didn’t quite match up with how he appeared in the story. It’s not a bad book per se, it just didn’t live upto any of the promise.

Always and Forever– I found Lara Jean’s final book really relatable- especially the part (*spoiler alert*) where she didn’t get into the college of her dreams. That kind of disappointment will ring true with a lot of readers no doubt. Overall, I preferred it to the second book, as the focus on growing up made it feel more necessary, yet it still didn’t quite capture my heart the way the first did.

So yeah, part of the purpose of doing this blog was to tell you all I’m not gonna be about… again! In the meantime, have you read either of these? Did you like them? Let me know in the comments!