*Received from Netgalley in exchange for an honest review* 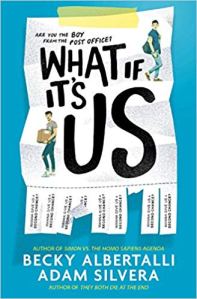 If you’re looking for a sweet contemporary romance, what’s better than a book by Becky Albertalli or a book by Adam Silvera? Well, *put your hands together* because here’s a book by both Albertalli and Silvera!

What I love about both authors is their ability to make me feel all the *feels*- and this book achieved that by the bucketload. From the promised meet cute, I got the impression that this story was going to be super, well, cute. Nay- ADORABLE! There was so many aww moments in this story I couldn’t keep count. All the way through, it made my insides squeeze cos of how sweet it was.

I also loved how quirky and funny it was. The quippy sense of humour and wit had me laughing out loud. And I appreciated the conversational writing style and particularity of the descriptions. It was so fun to get inside each of the main character’s heads.

Of course, this was super character led. Ben and Arthur were so well written that I felt like I was addressing them in my notes as if they were real people. Ben was a little bruised in the romance department, imaginative and somewhat oversensitive. Art- well, he was a little melodramatic, but as one of life’s melodramatic people, I related to him way too much. Actually, I also liked his slightly hyper personality, his spunk, his romantic nature and even got his immaturity. I swear that if Art were real, we’d be best friends 😉

What I liked about the story was how it dealt with romance after the two guys had come out. This wasn’t just another coming out and falling in love story- this was so much more than that. In fact, as previously mentioned, Ben had already been stung before. But that didn’t stop *the universe* bringing the characters together- and tearing them apart. What I liked was that both boys were looking for each other (which drew the line between it feeling stalkery on one side). And the detective work was fun (of course by the end of it I was squealing with glee- see what I meant about being overdramatic 😉 ) Ultimately, though, there were times when the relationship felt a little too tumultuous. And that brings us into the spoilery section…

While the falling in love part was done so well, I did feel like it felt too rocky, which made it hard for me to root for them throughout. As much as I loved the characters, it felt like they were both throwing unnecessary spanners in the works for the sake of drama. That said, what was great was that it didn’t give the typical ending. I spent a huge amount of time worrying that if they simply ended up together it wouldn’t feel totally right and if they didn’t the book would feel like a wasted opportunity… Somehow Albertalli and Silvera struck the perfect balance. The open ending was a stroke of brilliance, since it fitted with the theme of second chances and new beginnings. I liked that they got to throw destiny out of the equation and make their own story.

Okay, spoilers over. What was most surprising about the book was when Art’s friends got together, cos it felt a little out of place. And on the other end of the spectrum, I will admit that Dylan and his future wife did steal the show at some points. There were other “love interests”, like NY, Hamilton, Harry Potter and countless other pop culture references, which I was all over and really added a cool dimension to the story.

Overall, I was completely absorbed with this fun and romantic story- which is why I gave it:

Now I am actually a little late with this review, cos I thought it might be fun to share the fact that I went to a book talk at the Southbank Centre for this and got a signed copy!!

It was so fun to hear how collaborative the project was- and I especially loved hearing how Becky Albertalli wrote Arthur and Adam Silvera wrote Ben (I guessed correctly!) I really liked hearing how much of them was in each character, particularly cos I’d spent a lot of the book speculating about that!

Also exciting news, this has been optioned to be a movie!! Let’s hope Lin-Manuel Miranda gets to do the soundtrack (one can live and dream, right 😉 )

Okay, I’m going to shut up now. Have you read this book? Or anything else by these authors? Do you plan to? Let me know in the comments!

42 thoughts on “What if it’s us: the showstopping contemporary romance!”