Alrighty then- I guess this is my last session of being a Marvel fangirl (…for now 😉). You know the drill now- I get dressed up and there will be spoilers. And since this is such an explosive part of the story, let’s start this with a *bang* shall we? (cos heads up: I have a lot of controversial opinions coming up) 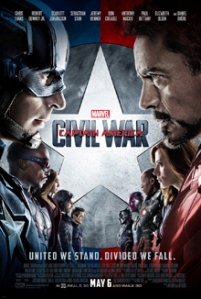 Captain America: Civil War– yeahhh there’s no easy way to say this- this wasn’t exactly what I wanted. All the reviews told me that “it’s so hard to pick a side” and “both of them have a point”… and I didn’t think that at all. I was *freedom* and #teamCap all the way. I know a lot of people like this movie, cos they say it’s nuanced, but I just thought Stark was wrong and that was that. I think after all the trouble Stark caused in Age of Ultron, he could have taken a step back, rather than screwing everyone else over for his mistakes and robbing them of their rights. Also, again I’m on the POOR BUCKY train. And I ain’t ever getting off. Again, I get that people see why Stark is angry with the Cap/Bucky- but IT’S NOT HIS FAULT (and maybe if Tony got his head out of his arse he’d see that) (oh gosh I’m gonna have all the Iron Men coming after me for that, aren’t I?) So yeah, I’m still a tad frustrated with this movie. I think I expected wayyy too much out of this one, thinking there would be some serious debate, and it didn’t deliver. One massive plus though was the introduction of Holland’s Spiderman 😀 And it does set up plenty for Infinity War and that’s not a bad thing. 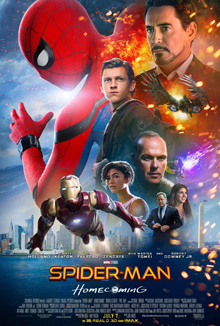 Spider Man: Homecoming– I’ve gotta admit, cos the Spiderman market is so oversaturated of late, this was one of the movies I was least keen to see… and it ended up being one of the best! Go figure 😉 But who’s complaining? This was a great Spiderman story. From the moment that Marvel logo rolled in, I realised Spiderman had come home. Thankfully, there were no origin stories, no campy villains. This was just pure fun. Finally, finally Spiderman felt like a proper kid. It did feel a little choppy with the opening and I wasn’t crazy about how wrapped up it was with Tony Stark. I probably could have done without it being quite so high tech (even if I get why it was used). However, it was cool that he created the web himself, like in the comics. And omg Stan Lee telling off Spidy was hilarious. It’s genuinely the funniest rendition of Spidy I’ve seen. The characters were also superb- both MJ and Peter were so cute. And it really ends on a high- especially with that end credit scene where May finds out! I even loved Donald Glover’s small role. Basically, there’s an awful lot to love about this movie!

Black Panther– this movie was clearly a labour of love- and I loved it for that! From the beautiful aesthetic to the way the soundtrack blended with the setting, this movie came together in a charming way. Some people have been saying that it’s typical superhero fare- and that’s true- yet that’s all I’ve ever wanted from my superhero films. The opening was intriguing and set up for some surprisingly deep drama. I liked how it reflected real world issues, dipped its toes into some dark waters, yet didn’t become overshadowed by these themes. Instead, the focus of the movie was on taking the mantle of the father and trying to be better. All of this tied in so well with the villain- who was both relevant and unhinged enough to be entertaining. I especially loved how it presented the “monsters of our making” idea. For me, this went beyond being a simple action flick. The tension and emotions were all on point. I was moved by the lovable characters and on the edge of my seat from beginning to end. I’m happy to say Black Panther more than lived up to expectations. In fact, I’d go as far as to say the (slightly unpopular opinion) that I enjoyed it more than Infinity War… though we’ll get to more on that in a minute. *This* is how you do a superhero movie!

Guardians of the Galaxy: Vol 2– first off: I LOVED the villain in this movie. I know a lot of people don’t think this is as good as the first one… but I think it’s better. The journey is so personal. And it’s ridiculously emotional. What’s clever about these movies is how they consistently add the family drama element to this saga. Not only does it explore the found family element so well, it also makes me more invested in the characters and ties in spectacularly with Infinity War (…more on that soon I promise…). All of this coupled with the fact it’s packed with funny, cute, emotional moments meant this was an out of this world experience!

Doctor Strange– this was very average for a Marvel movie, but an interesting start. Personally, I found Doctor Strange an okay character- not too enthralling, not too dull. I think my main takeaway was that he’s a poor man’s Tony Stark- slightly egotistical, allegedly very special. And I say allegedly cos aside from being a proven surgeon, there isn’t actually an explanation as to *why* he’s so special. It’s (rather frustratingly) repeated throughout the plot, there’s no explanation for his magical talent. Is it his intellect? Determination? Random natural selection? I just wanted to be given something. Ultimately, there was enough to this movie that I didn’t have a bad time while watching it, yet it failed to blow me away. The villain was meh, however, I do kinda want to see more of this character to get to the heart of what makes him tick.

Thor: Ragnarok– unpopular opinion: I wasn’t crazy about this movie. I’m beginning to wonder if I’m just super fussy with movies- cos everyone loved this movie, and I just didn’t. The tone and subject matter were endlessly jarring. I kept getting muddled about what I was supposed to be feeling in a lot of really intense action end-of-the-world scenes that were played for shits and giggles. A lot of the jokes didn’t land for me- it was too weird to take the subject matter of Ragnarok, with all its emotionally hard-hitting elements, and slam it into a buddy-comedy vibe. There’s an outstanding review for this movie over on Re-enchantment of the World, where they get into a lot more detail about why this doesn’t totally work- but one thing that they brought up that I will mention is how it was funny, but weightless. I think that about sums it up. There could have been *a lot* more substance to this movie. As much as it occasionally made me laugh, I came out of this feeling disappointed and empty (I do like the soundtrack though). 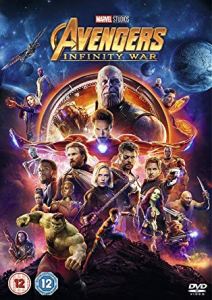 Avengers: Infinity War– it’s probably pretty clear to you from all these reviews that I’ve become a little obsessed with this movie. I can’t help but mention it in virtually every other review. It’s a testament to the power of this movie. So let it be said, for the record, that I really liked Infinity War… but it felt like half a movie. I feel like I’m reserving judgement on it until I see how it ends. Months after I watched it and I’m still uncertain about some elements. It does blend the multiple storylines pretty well, but a lot of the ideas for defeating Thanos seemed jumbled together. There’s simply so much going on and a lot of it is too inconclusive for me to make my mind up about it. That said, this has some emotional punch. I mean… wow. I can’t believe they went there. Most of my favourites ended up dead. For that alone, it’s going to be remembered as a landmark movie. And it’s definitely got me looking up all the fan theory videos and wondering who made the worst decision (I’m going with Peter- yeah Thor had the chance to win and failed, but obviously the real fault lies with Peter losing his head… though can you blame him? He’s only human- let’s hope he redeems himself in the next movie). Of course, I really loved the fact this was very much about Thanos- he’s such a domineering character. Even if I still can’t make total sense of his logic (I mean, the population will continue to grow and resources will continue to diminish… so surely it makes more sense to focus your effort on increasing resources?) I liked that this focused on his sense of family and loss. It was super well done. My only issue that remains is I don’t think I can judge this as a standalone movie… please don’t snap me out of existence for saying as much 😉

… although my opinion on this movie is subject to change… 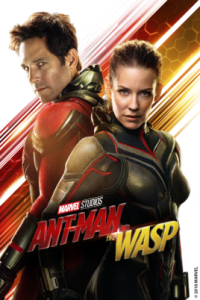 Ant-Man and the Wasp– Yeesh- this one really allows us to see the accords in action and I KNEW I WAS RIGHT. It sucks so much. At the risk of returning to my rant at the start, Stark was wrong, he made a Frankenstein-style error and then decided to rectify that by punishing all of humanity. It makes sense that he had the arrogance to play god and then thought that he could rectify his mistakes by being an authoritarian… BUT GAHFJFJJKND WHAT A DOUCHESCHNOZZLE!!! So, back to the movie. Iron Man has forced a bunch of (more or less) innocent people on the run and made the best father ever have to hide out in his house. Much like the first one, I loved the shrinking tech in this film- they do it in such a fun way. The villain had a personal connection to the story- alas also pretty forgettable. This was definitely what I’d class as an entertaining romp of a movie… until that end credit scene- when HOLY HELL we see what’s at stake for Infinity War! (yes, it had to go back to that again 😉) If you do like Marvel movies, I can safely say this is enjoyable and a great place for me to end these reviews 😀

Alrighty then- I know I’ve gone against the grain on a couple of these- so I’m curious to know: do you agree or disagree with any of my thoughts on Marvel Phase 3? Let me know in the comments!

62 thoughts on “Monkey at the Movies: Marvel Phase 3”