Gosh I swear every month feels like three right now. On the *massive plus* side, I did get some brilliant bookish swag courtesy of the lovely Lotte @the Reading Hobbit! Thank you so much to her and if you guys are looking for some great content from someone with excellent taste (especially if you’re a massive fan of the Hobbit like I am 😉 ) then look no further! 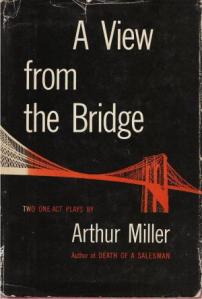 A View from the Bridge– well, I felt a little conflicted about this play- cos while it’s well written, it gets inside your head… and I’m not sure that’s such a good thing. Especially since the protagonist was a complete perv and there are some icky elements. A fair amount of that is implied- but, even so, it’s hard to read at times. Still, it gave a surprisingly complex view of immigrating- showing a clash of cultures, the visceral reaction to migration and the element of second generation immigrants “pulling up the ladder” so to speak. Ultimately, the story is one of betrayal- however it does also exemplify a poor community, with people struggling to get work, ergo showing why this conflict exists. Evidently, this gave me some food for thought: 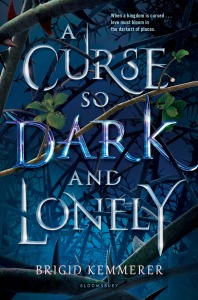 A Curse so Dark and Lonely- there was quite a lot to like about this book. For starters, I liked the toughness of the mc and how her cerebral palsy was treated. Plus, the line that her name, Harper, has “edges” was a brilliant piece of characterisation. And the epic finale was *epic*. The curse was interesting as well- especially since it affected everyone in the kingdom and it was an good take on Beauty and the Beast… but I still couldn’t get to grips with the world. For some reason or other, I didn’t feel like it captured my imagination. Also minor spoilers, there was this random plot point of the mc making up a country, in order to impersonate a princess. As Briana from Pages Unbound pointed out in a great post, there are reasons this can make sense- however, for me, it didn’t make sense to point out the flaw so often (pointing out a flaw doesn’t eliminate it) *and* I thought there should have been consequences for this deception. Some colour was added by Grey- particularly at the end- though I don’t think it was enough for me to carry on with the series. 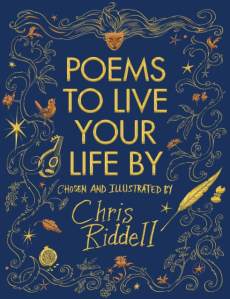 Poems to live your life by– or one man’s personal favourites. I don’t think all the poems in here are brilliant to be honest. I personally liked 40% of them- and I’d read nearly all the ones I liked before. That said, the illustrations were gorgeous- and this is Chris Riddell’s strength. It makes for a really pretty book and would make a lovely gift. I did think it ended on a wonderful yet nihilistic note- the “Tomorrow and tomorrow and tomorrow” speech from Macbeth is not necessarily an extract I’d use to conclude a collection of poems to live your life by, but o-kay… 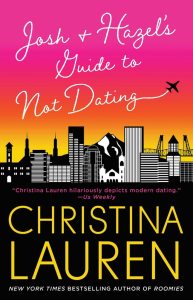 Josh and Hazel’s Guide to Not Dating– I’ll be honest, when this started I had no idea how the romance would proceed, cos when it started the couple seemed ill-matched. I also didn’t know what to make of Hazel… actually, I’m still not sure and I’ve finished the book. She’s a little… too weird (and that’s saying something coming from me 😉). The romance didn’t give me butterflies, but it was cute, funny and won me over. Also Winnie the Poodle is the best dog name ever. One important note is that it’s not YA- cos I’ve seen it mistaken that way online.

Alchemist– I had mixed feelings about this too. While it had some poetic moments, I’d estimate it held about 50% truth, 50% nonsense. There were lines like this:

–          “when you want something all the universe conspires for you to get it”- frankly this is patently untrue- and it often feels like the opposite.

However, there were also some truthful points like these:

–          “There is only one thing that makes a dream impossible to achieve: the fear of failure”

Because of these life-affirming and hopeful messages, it makes me not want to critique it too harshly. It also did pick up when the boy meets his love and had some cute elements like the idea true love won’t keep you from your destiny. I also liked the idea (however obvious) that treasure is back where you left it. I did like the positivity of the story- however it also had a massive dose of orientalism that is kinda cringey nowadays.

So have you read any of these? Did you like them? Let me know in the comments!