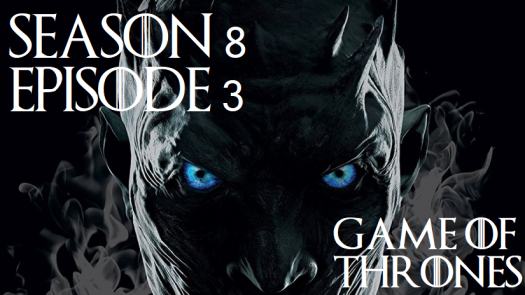 Shiver inducing. Heated battles. Pure, stunning madness. That’s the way I’d describe this episode. But I’m getting ahead of myself.

The opening sequences takes us up close and personal, slowly allowing us to witness some of the heroes on the ground. Then, the intimate camera shots pan out and suddenly we’re seeing the shadow of dragons overhead. Quickly now, we’re thrown head first into the battle. A visual spectacle that Game of Thrones knows how to deliver.

One major complaint I’ve seen is that this episode was too dark and it was hard to see what was going on. Personally, I was just fine with it- it matched THE DARKNESS IN MY SOUL MWAHAHAHA 😉 In all seriousness, I think they created enough contrast for me (plus I watched it in a darkened room in the middle of the night… I make good life choices 😉 ) It evoked a sense of war- unclear, foggy and not so pleasant to look at.

I have to mention that moment when the Dothraki started disappearing into the lines of the dead. It sent chills down my spine (actually, to be honest, I couldn’t stop shaking the whole time I watched). I can’t say their tactics were any good… unless they thought feeding the zombie army was a good idea 😉 BUT it was c-r-e-e-p-y af.

Because the tactics are so bad, I don’t suppose it matters all that much that Dany deviates from the plan. Also, it allowed for a whole lot of chaos to ensue. And for there to be really cool dragon fights! So yeah, I’m happy she messed up and made it more terrifying.

Though there was lots of scope, there were also exquisite character moments in the midst of it all. Sansa with her killer lines bonding with a witty Tyrion; Clegane coming through for Arya once again; Theon making amends with Bran.

Plot armour has (somewhat) been discarded. There were some hard-hitting deaths; there were some people I’m shocked survived. Skipping ahead a little, I found the Red Lady’s most poetic. And the saddest was by far little Lyanna Mormont. I can’t say I cared as much about some of the significant deaths, since all my favourites were nice and safe (presumably because they still have roles to play?)

Still, even if a lot more lived than I thought would, the tension was such that I didn’t feel I was robbed of true stakes. For so much of the episode I was convinced Winterfell would fall- keeping me on the edge of my seat- that I ultimately felt like the relief at the end felt well earned. Funnily enough, that sense of *there’s no escape* made me realise about five minutes before the big finale that they had to win or no one would make it out.

Well, specifically the moment the ominous music started playing, which means I didn’t really predict anything, I just took the cues I was given. As those notes played, I knew we were in for something special- though I could never have guessed just how special.

That ending was… *WOW* I have no words. I’m not including any gifs of THAT moment, in case anyone is scrolling through this site and sees it, but let’s just say I’ve watched it a lot. There is beautiful symbolism in that Arya killed death. It is the culmination of her story arc in the most perfect way imaginable. In terms of theories, there’s still a lot of the puzzle pieces to put together, yet I can safely say the meaning in the moment comes together in exactly the right way. The lines that have been woven into this song of ice and fire from the start: “Valar

morghulis”, “valar doharis” and “What do we say to the god of death?” “not today”. And the cutting use of the Valyrian steel dagger to protect Bran- the same one that started it all and that he significantly gave to her last season. I’m actually really glad it wasn’t Jon or Dany- though both of them expected to do it and hoped they would be the hero. There couldn’t have been a better end to the Night King- both because it is totally unexpected and really fits at the same time. To say I was blown away would be an understatement- more like I was stabbed in the gut and shattered into a million pieces 😉

QUICK ASIDE: I have seen a number of articles calling people out who (allegedly- I haven’t seen any receipts) say Arya’s a Mary Sue. For the record, no, she isn’t a Mary Sue: she trained for six seasons, is an accomplished assassin and anyone making this claim has been watching some other show for the last 8 years. Also no, this doesn’t devalue the term (otherwise we’d have to scrap a bunch of terms people misuse on a daily basis) so please stop using this ridiculousness to defend actual Mary Sues, k?

Back to the show! I can’t believe what I’ve just watched; I also can’t believe we’re getting more episodes after that *epicness*? I usually see that point as more or less the end of the story… yet here we are on the brink of another war. I always thought the two would link- now I think I’d better quit making predictions. I have far too many questions and no idea what’s gonna happen (beyond the Cleganebowl of course 😉) I have no idea how it’s gonna trump an episode like that- but I’m excited to see where it does go from here…

So have you seen this already? What did you think of it? Let me know in the comments!

40 thoughts on “The Long Night Cometh”