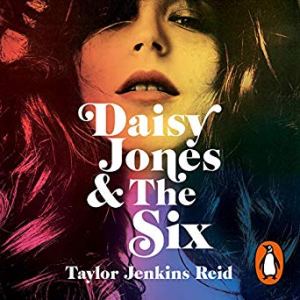 Before we get into anything, I have to say that again, the audiobook is the way to go for this one. With the multiple narrators, all putting in powerful performances, this the best way to experience the story by far.

What I loved instantly about this book is how immersive it feels. There’s something sultry and sexy about the voices that carries you away; their words are both natural and yet carry a distinct beauty. Incorporating lyrics that feed into the narrative, we get a sense that the characters are riffing through their stories, bringing the reader into their world. It’s especially cool that this is about a time period most authors won’t touch. We’re all rewarded with a big, bold, splashy title. And, thanks to Reid’s mastery, no one could say it doesn’t feel real.

Even better, Reid really comes into her own when she’s describing art. She has a true gift for making it feel like this band not only existed, but that you would have committed a major crime to go see them back in the day. Significantly however, this book doesn’t just leave you with the allure of the music scene. No, it goes deeper, bearing the darker undertones to the world. Daisy Jones doesn’t gloss over the hard topics. There’s a grittiness to this history and Reid doesn’t skirt around it.

What I loved so much as well as how the character portraits are drawn. The character of Daisy in particular goes beyond the usual, coming close to an enigma, dancing near the poor little rich girl stereotype and achieving cult-like status all at once. For the record: Daisy can be a jerk. She has a long list of negative traits, which compliment the other members of the band (who are all equally imperfect). Their egos did sometimes get in the way of my enjoyment and I will admit I wouldn’t like any of these people in real life. AND YET, that’s just it- they felt like people to me. No one could say they don’t feel real.

I also appreciated the way the contradicting stories gave a sense of where the lines blurred. Either the characters were so into their own stories that they didn’t notice what was happening around them or the memories had shifted to suit a narrative. It is as the narrator says at the start: truth lies somewhere in the middle.

What I loved as well were the messages embedded in the plot. It tells of the importance of earning things for yourself, of redemption and of love. While it begins in a dark place, it builds to an inspirational crescendo. I’ve barely scratched the surface of the stories here, as so many struck a chord. Reid is such a talented writer that the only downside to listening to the audiobook was I *wish I could’ve written down more quotes*. It’s those wonderful lines that sneak up on your soul and make it feel real.

I will say certain aspects were pretty predictable. The ending isn’t exciting or explosive or loud- BUT what is remarkable is how Reid turns the sadness around into a poignant final note. And, I can also say that if you listen to the audiobook your in for a treat as the story plays out…

What I love most about this book is how I feel like listening to it all over again. Perhaps it is not the perfect book, but for me, the main thing is that it feels real.

So have you read this? Do you plan to? Let me know in the comments!

39 thoughts on “Listen Up: Daisy Jones and the Six are Gonna Rock Your World!”