*Wow*- I waited wayyy too long to watch this, didn’t I? Let me back up a second. It’s no secret that after Game of Thrones ended (in the worst possible way imaginable) I was feeling pretty distraught and uninspired by TV. So I settled down to watch a classic… and I was not disappointed. 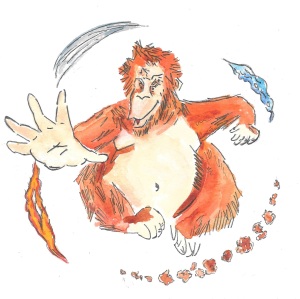 From the opening visuals, I knew this was going to be quite the experience. The artwork is literally stunning and the set up incredibly promising. With these gorgeous images, we’re thrown into a fascinating fantasy world, where people have the power to control the elements. Not to get too in depth about the premise (because a lot of people will know it) but essentially it’s set after the Avatar who can control all the elements disappeared and the Fire Nation took control. And let me be the first to say, that simple sentence could never do the world building justice. This not only has one of the most intricate magic systems imaginable, as the story goes on, it develops a deep mythos for each location it explores. Having watched this now, I can safely say I have no idea why anyone would try to reduce all this down into a (terrible) movie- it was always doomed to be a mess.

But this is all just background- I haven’t even got to the plot yet! While episodic in the most rewarding way imaginable, each season builds upto epic conclusions. In a ride as wild as soaring on a flying bison, we’re lifted off the ground and taken to new lows. There are times when the audience is rewarded for their patience; there are times when expectations are subverted- in the best kind of Empire-Strikes-Back way. The characters win and lose- keeping you on your toes! And I mean really lose- because it often feels like victory comes at great cost (and let me remind you this is a kid’s show!!)

In terms of individual episodes, it’s hilarious at times, devastating at others. Having mentioned all the fantastic finales, you’d think they’d be my favourite episodes- not so! The one that stands out to me the most (and a fan favourite) is the Tales of Ba Sing Se- an intensely character driven episode which will make even the most stone-hearted of earth benders tear eyed. I also thought Ember Island Players was one of the best recap episodes in the history of TV.

All of this said, I haven’t even mentioned the best part of the show: the characters. From Katara to Toph to Sokka, it has a strong cast of supporting characters. There are amazing villains; there is a hero you can root for- one whose struggle to be the Avatar ties in with the fate of the world. I loved how he had to make sacrifices in order to reach the end of the story and it was never an easy path for him. On the subject of difficult journeys, my favourite character (perhaps predictably) was Zuko- I found him fascinating from the off: his backstory intrigued me, the promise of a potential redemption kept me hooked and every choice the character made had me on the edge of my seat. And I especially liked Azula as his foil. It’s because of characters like him that this show has such a reputation for amazing character development.

I’m also delighted to say this show had a beautiful ending! The justice meted out certainly gave balance to the magic in this universe. I will quickly say that the only thing in the entire show that I had an issue with was how the relationships turned out. At the risk of annoying old fans of the show (who are no doubt still licking their battle wounds from shipping wars of a bygone age) Aang/Katara *at all*. This isn’t just because my ship didn’t sail (le sigh) it was because I thought it came across as forced and I disliked such an awesome female character being reduced to the hero’s reward… But I don’t want to bog down the end of this review with this- though I’ll definitely get into it at a later date- because this wasn’t ultimately detrimental to my enjoyment. There is so much to this show that I loved that I simply can’t cover it all. I wouldn’t feel reasonable giving this masterpiece of television anything less than:

So have you seen this? What did you think of it? And when did you join this party? Let me know in the comments!

48 thoughts on “Monkey at the Movies: Avatar the Last Airbender Television Show”