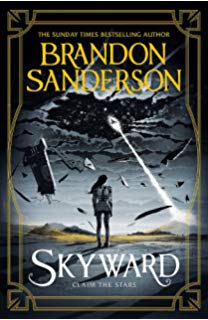 When I got approved for this book, it’s safe to say that I pretty much lost my head I was so excited! I mean, I have endless respect for the author’s writing and this space adventure was one of my most anticipated reads of the year. Needless to say, I was on board!

And then we had lift off! And *wow* I was carried away by the immediacy of the voice and the fantastic characterisation of the lead. Spensa’s personality leapt off the page, waved off all the competition and roundhouse kicked my butt to attention! If ever there was a character who literally grabs you and pulls you into the story, it’s her! She was so spirited and zesty and funny- it was easy for me to fall for her. Her turn of phrase (or I should say the author’s command of her character) was particularly hilarious.

I was soon propelled on by the mysteries embedded in the story. As we delved deeper into the background of the world, it quickly became apparent that there were hidden notes and plot points hiding behind the stars. There were beautiful snippets of stories within stories, family histories and a universe of secrets. The world building wasn’t just a passenger for the plot either- it played a massive role in the narrative (which of course I can’t mention cos of *spoilers*- but whether you guess the twist or not, it’s a good one!) This is the kind of story that takes you along for the ride- it rises and falls and swerves unexpectedly. All culminating in a stunning ending- but, in my enthusiasm, I’m getting ahead of myself.

One of the best things about this tremendously action-packed book is how character driven it was- and not just by the aforementioned sensational protagonist. Each supporting member of the cast pulled their weight- which is pretty tricky to do in space 😉 They were not just well drawn or there to serve a purpose- they felt fleshed out and real. This was largely thanks to so many of them being inversions of clichés and designed to turn tropes on their head (my favourite example being Nedd, the not-so-stupid stupid character). All of them played their role perfectly- creating friction and tension for Spensa- and then surprising her (and us) in equal measure. I was legit cheering them on by throughout! There wasn’t a single dud character- even the antagonist was both thrillingly threatening and fascinatingly human. And, of course, I had my usual soft spot for the AI 😉

I also adored the way this handled larger themes, like the question of following your programming versus being defiant. It raised so many questions and was entrenched in complex philosophical ideas. There were so many details and exquisite writing choices- ultimately it all came together in a harmonic new world symphony, an out-of-this-world experience, and made me starry-eyed with wonder. Plus, it was the kind of self-contained story that leaves you satisfied, yet hungry for more! There’s no doubt in my mind this is going to be a future sci fi classic. Can’t wait for the next one! Obviously:

So, have you read this? Are you planning to? (seriously- if you haven’t already- do it!! You won’t regret it!!) And who else is psyched for the sequel?! Let me know in the comments!

44 thoughts on “Uplifted by Skyward!”