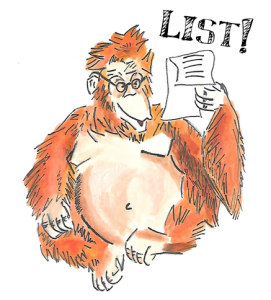 As much as I love books, I have to admit there are ever so slight problems that I *hate* so much they’ll ruin my enjoyment of a book. Reasonably or unreasonably, these can get me peeling back my banana rating at an alarming rate. And, though I’ve talked about the rather large issues that HORRIFY ME, I haven’t talked about these little pet peeves. That’s why I was really inspired by the brilliant N S Ford to air my biggest bug bears when it comes to fiction. Of course, this is a very personal list, so don’t please don’t take it personally if you like this stuff/the books I’ve included, yada yada yada… let’s get onto the juicy stuff, shall we?

Moralising– okay, yes, I say it a lot- BUT THAT’S COS IT REALLY GRINDS MY GEARS! I will never understand why some authors have to *stop everything* just to preach at us. If I wanted to hear what random people had to say about their views, I’d spend three hours trawling through twitter instead of buying a book.

Unwanted/unnecessary politics in books. Obviously, there are exceptions (if I pick up a book on a particular political topic, I’m not going to get mad at it for being what it says on the tin, whether it’s fiction or non fiction). However, much like with moralising, I’m really, really not interested in an author’s opinions on politics. I don’t read fiction books to get my political views and I have no interest in virtue signalling interludes. I just want to switch off and enjoy my rom com in peace, k?

Pretentious characters. Oof, these ones get under my skin. It’s not just that they’re basically the most unlikeable characters, it’s that they often seem unrealistic too. I feel like I’ve never met anyone in real life who is as pretentious as characters in books somehow manage to be.

Excessively quoting other books to sound clever. Again, with exceptions- one my favourite things in books is subtle allusions and references. Nonetheless, I rarely think of it as genius when a book incessantly quotes other works to sound smart (references and epigraphs are mostly fine). Bonus irritation points, on the other hand, if you manage to combine it with a pretentious character (there’s basically nothing I hate more than characters who, rather than holding conversations, quote reams of poetry back and forth to each other. And, in keeping with my view that these are unrealistic, no one does this in real life).

Name dropping book titles to sound smart. Okay this is very similar to the last one- but somehow manages to be astronomically more annoying! It doesn’t make a character or author seem smart to just list a bunch of books the character read. I saw this a bunch of times in 4321 and I’ve no idea why the author did it. Really got on my nerves by the end.

Silly writing gimmicks for no justifiable reason. Sometimes I can be okay with it if it was done for a reason, such as when there weren’t quotation marks in the Road, because it was edgy, post-apocalyptic and it added to the tension. That said, the same cannot be said for Conversations with Friends and Normal People. I’ve spent ages trying to dissect why the author would use this- and can’t think of a single good reason. I get that she was going for a millennial vibe that she developed writing emails… maybe then I’d have let her off the hook for using slang, yet the lack of speech marks doesn’t add up (I also think it must be kind of irritating to get an email from Rooney if she just doesn’t bother to use good punctuation). Sorry, I don’t get it.

Oh look there’s another chosen one– or any other super predictable trope. I’m not keen on when things are too derivative or been done to death- and I mention the chosen one cos this is one I’m most tired of seeing. Especially if it comes with a prophecy attached.

Books that are just set up (looking at the *entire* Dark Artifices series). I don’t mind if series go on and on- but I don’t want to be sold a story… only to realise I’m going to have to buy another book (and then another and another) before I actually get what I paid for.

Repetitive content– similar to the last one I don’t like to have my time wasted. So, once you’ve made a point, done some character work or had something happen, please don’t just repeat it a few pages later! Worst case scenario is when an entire plot consists of having characters captured, then escape, then get captured again- by the same frickin villain!! It’s not only dull, it makes everyone in the book look kinda incompetent. No book needs that kind of padding!

No plot. Cos apparently this makes you really clever as a writer. Just kidding! I’ve no idea where people got the idea that writing a book where nothing happens somehow makes it work of genius… It’s not like Shakespeare, Dickens, the Bronte sisters or basically any of the greats decided that they were just gonna skip the plot and ramble on aimlessly for 300 pages.

And that’s all for now! Do you agree with any of these? And what are some of your biggest bookish pet peeves? Let me know in the comments!