***Received from Netgalley in exchange for review, but the upbeat ramblings are all me!*** 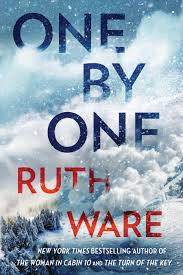 Being stranded in the snow-covered alps with a group of people that hate each other sounds pretty close to the ninth circle of hell. No spoilers ahead, but that’s pretty much the vibe of Ruth Ware’s spin on And Then There Were None. To give you a quick snapshot, One by One gives us an inside peek at a tech company retreat that goes horribly wrong. And as you might suspect from a book with such strong Agatha Christie vibes, this has some pretty wild twists and turns.

Isolated in at a ski chalet after an avalanche, it’s the perfect setting for a claustrophobic thriller. Even though I was reading it in the summer heat, I caught chills. The atmosphere totally transported me. I was locked into these character’s heads, not knowing who I could trust and where it was leading.

Very quickly, the story freefalls Off-Piste. People start dying. There’s real tension as the pace picks up and the tenuously forged alliances go downhill. The plot plummets over the edge as it races towards a heartstopping conclusion.

Each of the POVs worked for me. They led me down one path, only for me to discover I’d been led astray. My allegiances shifted with the narrative. I loved snooping inside the main character’s heads and thought their perspectives were fascinating. One by one, their secrets get revealed… until there were none.

Speaking of nosing into other people’s business, that’s along the lines of what this tech company does, listening to celebs music taste along with them. While I didn’t relate to this social media aspect completely (I’m much too uncool for all that) I have to admit it added a salaciously soapy dimension. I couldn’t look away.

Ultimately, this ticked so many boxes for me. Thumbs up!

And that’s all I’m going to give you! Do you plan on reading One by One? Have you tried Ruth Ware before? Let me know in the comments!

19 thoughts on “One by One Piqued My Interest”