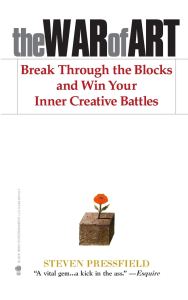 Oof this was a painful one for me to read. If you liked it, then more power to you, but for me this was an uphill battle from the start. Look elsewhere for positive reviews, because I’m going to go all in on this one. I don’t want any fights to break out, I just found this book ridiculous. Something (well a lot of things) really rubbed me the wrong way here.

My issues started with the childish personification of “Resistance”. And, no, that’s not my capitalisation. The author does that to make it seem Oh So Very Important. To me, this idea that “People have Resistance” didn’t come across as especially profound. It just seemed like a rather juvenile way to say sometimes people procrastinate. Well, that’s how the idea starts out- it gets a lot more ludicrous.

Who am I kidding? This guy knows jack shit about anything. Look, I get it, self help books tend to be light on facts- however this takes it to a whole other level! He plucks statistics like “70% of doctors think there’s nothing wrong with their patients” out of his arse and I’m over here thinking WORKS CITED?! I mean, even if that wasn’t an opinion, I’d like to know where he got that figure from. I also don’t think opinions should be stated as facts by the way- for instance I get that he hates critics, yet sadly for him it’s not true that no one successful ever critiques anything. Still, my favourite of his hilariously wrong “facts” was this:

“You know, Hitler wanted to be an artist. At eighteen he took his inheritance, seven hundred kronen, and moved to Vienna to live and study. He applied to the Academy of Fine Arts and later to the School of Architecture. Ever see one of his paintings? Neither have I. Resistance beat him. Call it an overstatement, but I’ll say it anyway: it was easier for Hitler to start World War II than it was for him to face a blank square of canvas.”

I hate to burst his bubble about Hitler, but a quick google search could have corrected this assumption. Hitler painted plenty- although, as is typical of narcissists, they’re not up to much. Perhaps- and you can call this an overstatement if you like- if Hitler hadn’t been a raging psychopathic narcissist he wouldn’t have started WWII. Or maybe Hitler was resisting his Resistance and following his dreams- after all, according to this author, foisting your opinions onto the world could also be living up to your potential 😉 And if all that sounds silly, that’s because it is. I’m taking this book as seriously as that paragraph deserves.

What makes this even more ludicrous is how so often the ideas put forward are later contradicted. For instance, you know how I mentioned that he called sex Resistance? Well you can also be Resisting having sex (so I suppose that’s resisting resistance?) Early in the book, he says not to worry about what you’re writing, as long as you do it (BTW that’s how you end up with books like this in the world). He feeds into one of my pet peeves of favouring money over fulfilment; he talks about obsessing with craft over writing… BUT THEN decides to go full-on kooky in the final part. Look, I may not agree with being purely practical, yet you can hardly call people precious when you invoke the Muses. That’s about as flighty an idea as you can get. It’s just so unbelievably hypocritical.

Would I say there’s nothing of value in it? No, but frankly I don’t want to go digging through mud, looking for the occasional (cheap) gem. Even if I agreed with one or two of the ideas (like not giving into victimhood and continuing on after success) I’m afraid it’s too little, too late. Frankly, if I’d never heard those ideas before (which, obviously I have cos they’re not very original) I wouldn’t have taken them to heart coming from this terrible book.

I found this so lazy that I’d guess it was far more effort for me to read than it was to write. It was grandiose and pompous, while at the same time being utterly mundane. It may not be the worst book in the world, but I can’t give it more than:

Yeah that was a little harsh- I’m sorry! Some books just wind me up! Have you read this? Did you get more out of it than me? Do you (still) plan to read it after my review? Let me know in the comments!

23 thoughts on “My Battle with War of Art”