This series will always give me chills. Not only because of the atmosphere and the setting, but because this story quite simply stole my soul when I was a child. It was my first foray into darker fantasy and it was a gamechanger. It didn’t patronise me or give me unrealistic expectations about reality- it told the truth.

And the characters! Too often, the protagonist in MG is perfect. They have no faults and they act as a mere conduit for the action- but not so with Lyra! Lyra was not a typical child heroine- she had flaws and a seemingly paradoxical personality. She felt like someone I might actually know. And she wasn’t the only one bringing the story to life- as with the children in the story, the adult heroes and villains and parents were all morally grey and oh-so-very human. I saw then that this was a book that wasn’t prepared to talk down to its audience or treat children as stupid- the whole point of this book is to give you the freedom to think for yourself. 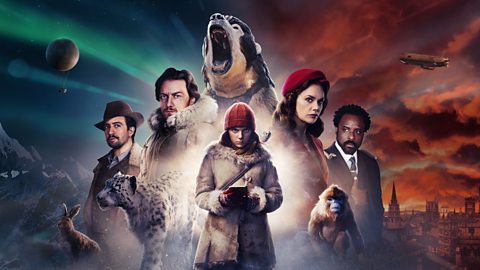 But I’m getting ahead of myself with this reminiscing. Let’s bring this back to the present tense and what finally spurred me on to do a reread- and that’s the adaptation. As I’ve said before on this blog, I do really like the show. A lot of the acting is spot on- we have the best Mrs Coulter, Lord Asriel and Lee Scoresby we could ask for. And the style is vivid and memorable.

… and yet it wasn’t the same. Because as much as I have talked about the darkness in the story, the flipside is that His Dark Materials also has a lightness to it, capturing the ephemeral beauty of childhood. Lyra herself is more innocent (and considerably less angsty) in the books. And Lyra’s Oxford, while having a dark underbelly, also gives off a sense of magic and wonder and enchantment. All of which felt a little lacking in the show.

For me, this highlighted some of the subtlety of the book. Critically, while there are hints that things are even darker in the story, it is often cloaked by a layer of ambiguity. The greatest horrors of the book are not described in visceral detail- but rather hinted at and glossed over and subtly worked into the prose. Fundamentally, this gives the sense you are seeing the story through a child’s eyes. And, as a child, it made the story feel all that closer to home, whilst simultaneously shielding me from the full implications. As an adult, it’s creepier and all the more shudder inducing (ironically as a child Pullman was talking a little over my head- but I didn’t know that at the time!) And, of course, I realise that the show is a different medium and perhaps it was impossible to represent this on screen- nonetheless it is a pity to be missing this element.

Oddly enough, despite what I said about the show was not as light, there were element in the book that were even darker. For instance, Lyra is dealing with a significant amount of trauma in the second book, which (in my view) turns her wilder than ever. It’s not prettied up for the reader- it’s harsh and it’s realistic. We feel just as lost as Lyra as we search for the bridge between the first and third stories. FurthermoreWill takes on the mantle of murderer more readily in the book and even threatens to kill Lyra… which she believes. And yet neither of them think of this by the end of the story, because children are prone to bursts of hyperbole. For me, there’s something about this callous honesty that really captures the childishness of the characters. Lyra and Will- for all their attempts at mimicking adulthood- don’t know what they’re doing. And this is so important to the plot.

Because the ignorance with which they act carefully draws the link with Paradise Lost– toying with the theme of original sin, the pursuit of knowledge and the fight for freewill (far bigger themes than your average children’s books). As a coming-of-age story, it’s remarkable and unique. And the deeper you get into the series, the more complex its philosophy is. The betrayal becomes not just a betrayal of others- but a betrayal of the self. Lyra loses a part of herself- and yet also undergoes a necessary trial that’s part of growing up. She acquires knowledge- and yet that knowledge comes at the cost of a new awareness. Yet this is shown to not be a bad thing at all: growing up is hard… but a wonderful (and sometimes beautiful) experience. As much as children can seem clear-eyed, the wisdom of age shines as a brighter promise. And, as Pullman identifies, anything worth having is worth working for.

Now, of course, it’s not perfect (though I would not expect that from true art 😉). It is certainly of its time, with its hints of post-modernism and militant atheism. And yet I truly respect this book for its candour. It does not moralise or deliver a utopian propagandistic conclusion- it leaves the final thoughts up to the reader.

So, have you read this series? Do you plan to? Let me know in the comments!

40 thoughts on “His Dark Materials Book Series: A Glowing Review”