Hermione Granger Is A Racist

Well hello again! As you may know, in my last two posts, I’ve been “reading between the lines” of Harry Potter- and if you don’t know what I’m talking about you can catch up with part 1 and part 2 here and here. Today I’m going to fill you in on the last piece of the puzzle. Because now that we’ve confirmed that Voldemort (in the guise of Ron) is really the victim and Harry is the villain- what does that make Hermione? Well I’ll tell you: a racist. “How did I reach that conclusion?!” I hear you ask- allow me to explain!

One of these days you’re all gonna say I’ve gone too far with these satiric posts!

Now that I’ve successfully ruined Harry Potter for you all I’m going to go hide under a rock and hope that the Potterheads don’t get me! Any good tips on where to hide? Preferably somewhere in the Muggle realm- I don’t want to run into any pissed off wizards now that I’ve , ahem, revealed their heroes for who they really are… 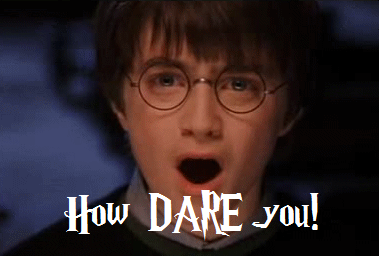 Okay, so if you’re back for more, that clearly means you’ve read my last post and whole-heartedly agree that Ron Weasley is the Dark Lord. And if you don’t know what I’m talking about, you can check out my last post here, where I’m quite confident of convincing you of my , ahem, I mean absolutely genius epiphany. Now I’m about to explain to you why Harry Potter is the *real* villain of the story- buckle up cos you’re in for quite a ride! 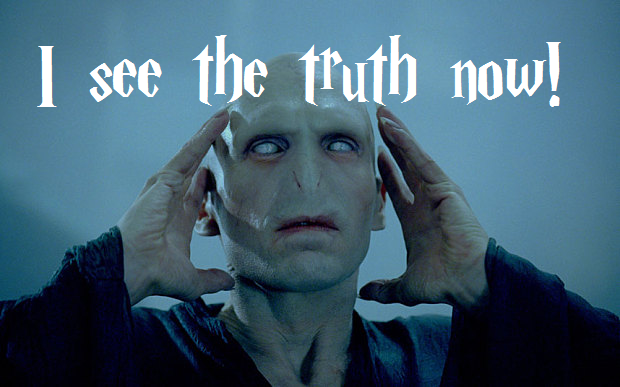 Well- I hope you are all sufficiently enlightened after that! And if not- what’s the matter with you- didn’t you “read between the lines” like I did? Jeez! I’ll be back tomorrow with the last lesson on the matter- hopefully you’ll get the picture then!

So if you read my last post, you will know what a “fan” I am of people saying “read between the lines” (and if you don’t know you can read my rant here). After that post I just thought it would fun to share an example with you all of how you can read between the lines of just about any book! And since it seems to be Harry Potter month on the Blogosphere, I thought what better time could I have to write out my “best” interpretations of Harry Potter. Today- I’ll be starting off by debunking the biggest Harry Potter myth of all: that Ron Weasley is Harry Potter’s loyal friend and sidekick. THE TRUTH WILL SHOCK YOU- because I’m about to prove beyond any reasonable doubt that Ron Weasley is in fact the Dark Lord:

Still not convinced? Well here is a pic you can’t argue with:

Caught in the act! Stay tuned for part two where I will reveal more Harry Potter theories truths to you all!! And I’m not going to ask if you agree with my interpretation- because if you read between the lines you are certain to reach the same conclusions I did! 😉

*Warning: I’m talking about one of my biggest pet peeves- this may get ranty*

Hi all! So I’m gonna start by laying all my cards on the table. In my last post I admitted to committing the cardinal reading sin of just assuming a character was gay. While this is a somewhat popular theory around the book, I didn’t bother to back up my point, cos I know that while I was reading this was something that I just felt rather than based on any textual logic. Admittedly we all do this from time to time- and as long as we accept that these are fanfic-y assumptions we have made and not actual facts, we can all go along with our lives quite swimmingly.

The problem, for me, arises when people present what is actually a very flimsy opinion as fact. I cannot tell you how many times someone has said “well I just think so-and-so was secretly in love with so-and-so” and when I ask for evidence of this they just say “read between the lines!”

No, just no. That is not how analysis works. I’m gonna come right out and say this: there is no such thing as reading between the lines. I mean if you step back and think about it, what is actually in the blank space between the lines, except maybe a few scrawled notes we may have made? (yes I’m guilty of writing in books- it’s not sacrilege if you’ve ever been an English Lit student!) As self-referential as we may like to be, it is hardly good academic practice to say: “well I think so-and-so was in love with so-and-so- because that’s what I wrote in my notes!” Good analysis actually requires going back to the source material and showing that this is the case.

Remember what your primary school teacher said about how, when you construct an argument, “you can say anything as long as you can back it up”. Well- we need to go back to that- with an emphasis on that last part! Because at some point, when you make a claim, someone will say “prove it”.

More than that, we need to remember that sometimes the evidence is weighted in the other direction and an interpretation can be wrong. Because sometimes, someone can show evidence to the contrary that fits the story better. And also, to be absolutely clear, the absence of evidence is not evidence! (No matter how hard someone tries to convince me that, say, Mr Rochester is a zombie, I’m guessing that I will remain unconvinced). It’s obviously fine to have parallel convictions about what a book means, but sometimes opinions contradict each other and- this may come as a shock to some people- only one person is right.

And that’s a good thing- that’s the whole purpose of debate! We are actually trying to reach some sort of conclusion! When someone says: “I don’t agree with that interpretation, where’s the evidence for that?” it’s ridiculous to just throw up your hands and say “read between the lines!” Because that is not an argument. And if you say that, don’t expect me to take you seriously.

Okay- phew- glad to get that off my chest! What do you think? Are you open to more vague interpretations or are you more finicky about these things like me? And do you have any reading pet peeves that make your blood boil?

(Although, if you’re offended by a satirical reading of Kipper’s Book of Weather, then there really is no hope for you!)

Well, isn’t this just the book that keeps on giving? With one word on each page, it is the height of minimalist style (Stephen King would be proud). Full of illusory and non-illusory techniques, the use of pathetic fallacy foreshadows the inevitable happiness Kipper feels when the weather stops being so schizophrenic. Of course, this dichotomy between unpleasant and pleasant weather appeals to me because I’m a Brit- and everyone knows we love talking about the weather.

Perfect for adults and children alike, this book is open to so much analysis! For instance, in a Marxist reading, Kipper represents the proletariat willing to go out in all kinds of weather and do the work the bourgeois are unwilling to do. From a Freudian perspective, on the other hand, the weather is representative of a dreamscape- which is symbolic of Kipper’s Oedipal obsession with his mother, who is missing from the story, because this is an anti-feminist work that excludes women- because PATRIARCHY (see how I squeezed in a feminist reading there? No, this is not a tenuous link- it totally works). Obviously there are also some signs of oppression here in this highly post-colonial work that I’ve missed because I do not understand The Struggle.

And…. that is all I have to say. What? Did you expect an essay? There are only about 5 words in this book! But if you have anything to add feel free to let me know in the comments! (Or, you know, you could just talk about how I’ve completely lost my mind- that works too)

Disclaimer: This is satire. If you are offended, then I recommend you watch Seinfeld, in the hope you pick up a sense of humour. All the ideas are my own, except for the ones that belong to Adina Holder, who I couldn’t have done this without 🙂

So without further ado, here is my liberal reading of “Throne of Glass”…

In Throne of Glass, Valg are depicted as evil, soul sucking, body stealing monsters. But are they really? Could it all just be a ploy by right-wing readers to keep us from seeing who the real victims are? Orangutan Librarian reports.

While “Throne of Glass” is an enjoyable series, I can’t help but notice a glaring moral dilemma embedded in the narrative. For, every time a hero or heroine executes “justice”, is there not a possibility that they are actually perpetuating a terrible evil? An evil that, until now, has not been fully recognised. I propose that it is not the Valg who are the enemy- but those who refuse to see the other side of the debate. Because who, in all these books, is standing up for Valg rights? After all, the poor Valg don’t even have bodies to defend themselves! Clearly, the real issue here is the mistreatment of the Valg.

No one talks about the reasons the Valg want to migrate into a new world. Most probably, they are suffering back in their own lands. They should have refugee status. No, we should go further. Everyone should open up their body to share. It’s their human rights. And, yes, I say human because they can be human if they want to be. The Valg have always felt human, they have always acted human, they have always believed they were human. They’re just being who they really are. No one has the right to tell them they’re not. It’s disgraceful that the main characters in Throne of Glass deny them these basic rights. And racist. And homophobic. And probably misogynistic- because most things are misogynistic.

Of course, none of this gets any mention in the history books, because the world is human controlled. Obviously, this is down to the Jewish media and the evil Zionists. N.T.C Mite, of Conspiracy’s R Us, puts it most succinctly: “No doubt the Jews ate the Valg children and then covered it up with trite propaganda. But we know the truth! We are incredible for being the only ones to see the pattern and now we must teach the world.”

It certainly seems logical. The hidden signs of Zionism are everywhere: the stones the Terrasen’s lay at their graves, the references to their “homeland” and yada yada yada. And who’s to say the Terrasen holocaust ever happened? Not content with running this world, it seems the Jews have set their sights further, determined to control fantasy worlds too. Who knows where their reach will lead next? Perhaps Middle Earth or even (heaven forbid) Hogwarts.

I for one hope that Maas resolves this in the last two books- hopefully with the redemption of the Valg and all the main characters indicted for war crimes. Or I might be inclined to call her a racist.