I can’t believe I’ve only been back a month, cos a lot’s happened! I had an eventful October- I went to Mayerling, life drawing and read *a lot* more. Apart from the ballet, the highlight of the month was my sister’s birthday, when we went to something called Disco yoga- who knew that was a thing, right!?

Anyway, I don’t imagine this month will be so eventful… cos in November I like to set aside more serious writing time before the holiday season. Now I never properly participate in Nanowrimo (national novel writing month), cos writing 50,000 words in a month isn’t me, BUT I do always feel more inspired at this time of year and like to set myself more challenging goals. That said, this month I’m gonna have less time and where I’m at in my WIP means it’s a bit more emotionally draining to get through. Plus, last year I set myself a target of writing 20 chapters and missed the target by 5. So, my goal is pretty loose (I literally picked a number out of thin air- like “ten, that’ll do right?”) and I’m more concerned about making sure I do some writing every day, since I got out of the habit in the summer.

What does this mean for the blog? Well hopefully nothing too drastic. Like I said, I’m not doing anything too intense. I am still playing catchup at the moment- I’m horribly, horribly behind on comments and bloghopping- but hoping to not fall even further behind (*fingers and toes crossed*). I do want to do a few lighter posts this month, but we’ll see.

Anyway, like I said, I did quite a bit more reading in October, so I have a fair number for mini reviews. And as it was October, a fair number were spooky:

A Court of Frost and Starlight– starting with something atmospheric, but not remotely scary… The thing is I didn’t dislike this- I just wasn’t that excited by it. Mostly cos it felt completely unnecessary. There were a lot of recap elements- which took up loads of space- and seemed silly given it was a novella. And there wasn’t anything of real substance- there were no major changes or character development. If anything, in terms of the sisters Elain and Nesta, there was some character regression. On the plus side there were some lovely lines:

“To the stars who listen… And the dreams who answered.”

“To the blessed darkness from which we are born and to which we shall return.”

One of Us is Lying– the truth about One of Us is Lying is it was simply okay. The writing was alright. The characters were a bit too cardboard cut out to be interesting- despite the obvious attempt at subverting stereotypes. Some of the people in the story- like Addie’s mum- felt too much like cartoon characters. In terms of the plot, there were some cool twists and turns, however, I guessed quite a few of them because of the hints. As for the ending, you’ll have to *highlight for spoilers* I hated *Simon* so much and thought he had it coming- so I honestly wished that he hadn’t orchestrated the whole thing. The most irksome thing about the ending was the pointless split, because it felt like needless drama tagged on for no reason. Still, it went by fast and there were some nice details.

Girl of Nightmares– well this felt a little directionless and less colourful than the first… until Anna was reintroduced in an explosive scene. It was a cool story- though it didn’t hold my attention the way the first one did. The pace did pick up eventually and I liked it overall. It just wasn’t as good as its predecessor.

The Forest of Hands and Teeth– cool title, meh book. I liked the slightly cultish, religious, post-apocalyptic setting… and that’s it as far as the “likes” go. Cass, the protagonist, made very little sense to me and couldn’t fathom for the life of me why she had two boys chasing her. Yup- that’s right- there’s a love triangle. And not only is there a love triangle- it takes over. Yup again- this is the kind of story where survival against zombies takes the backseat to the mc’s love life. Ultimately, that’s not even the worst bit. Cos this committed the worst book sin of all: it bored me. 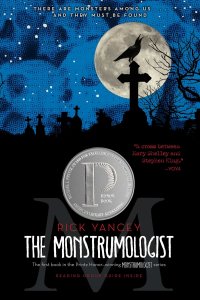 Monstrumologist– I liked the frame narrative structure and the writing style seemed authentic for the narrator’s age. In fact, it was the strong sense of voice that got me through this. Cos other thann the good instances of foreshadowing and the graphic descriptions of the monsters, there wasn’t much else to write home about. However good it technically was, I simply couldn’t connect with the characters and that got in the way of me enjoying the book.

City of Ghosts– this was quick, well written and had an interesting premise… HOWEVER I had major issues with the way the setting was done. My main problem being that I’ve actually lived in Edinburgh and this didn’t make me feel like I was exploring the city. It was like the soul of the city I know so well was missing. So I realise this is completely subjective and I’m sorry for that cos I don’t think it’s a bad book by any stretch of the imagination- feel free to skip this section if you liked the book. For me though, this felt like a tourist shopping list: here’s South Bridge, ooh the Royal Mile, oh look it’s Greyfriar’s. Actually Greyfriar’s was one of the most glaring disappointments, since the way the story was retold didn’t move me in the slightest (when it should have done). None of this felt like capturing the spooky atmosphere- it was more like the sights were pinched by someone that had only taken a cursory glance at a map of the city. This was also jam packed with Harry Potter references- which just made me think “yeah, we get it, you like HP”. Side point: why do people always obsess over the HP toilet in the Elephant House when the chairs are shaped like elephants!! I also cringed at the “oh look the castle’s like Hogwarts”… erm the castle came first? Aside from my griping about how the place was represented, I also took issue with the way there was a stereotype of the snooty English schoolgirl… in Scotland. That’s just lazy. Since we’re on the subject of Lara- why do Brits in American books always say “we British”? Actually, now’s a good time for one last public service announcement: the whole “isn’t it funny that American English and British English is different” is banal. I know this is for children, but think explaining the difference between chips/fries, pants/trousers, and how to actually pronounce Edinburgh is cringey.

Phew- that got into quite the unintentional rant. I know it might not seem it cos of how disappointed I was with the setting, but I did actually enjoy large portions of the book. So as surprising as this may be, I gave it:

Horrorstor– I loved the premise for this. I appreciated the wry humour and pretentious furniture theme. Everything had a silly name- like Muskk and Arsel (my fave)- and came in uppity colours. Plus, the characters were well formed all things considered- I especially liked Basil cos we’ve all met someone who takes their job too seriously and acts like it’s a cult. It was clever to parallel the layout of the shop with a panopticon. Even better was inclusion of the Gruen Transfer concept- deliberately disorientating you to buy stuff- which is such a creeeeepy idea in its own right (goes to show furniture stores are freaky on their own? I’m not alone in this am I?) The scary aspects were so well done- the “products”, like the Kranjk, got creepier and creepier. Even thinking about it right now gives me the heebie jeebies. The only downside was the cliffhanger ending. Now I get why people disliked it, but it did make a certain sense to me. Ghost stories are good when they’re unresolved. That said, even I could have done with a tad more resolution. Also, apart from the killer concept, it didn’t feel too deep and was mostly all for scares. And in that department, it worked for me (though I do scare easily 😉 )

The Sorrows of Young Werther– I first heard about this from Liis’ awesome review. Her recommendation made me want to check it out- and I’m glad I did! Now this is all about a character who is obsessed with a girl, but can’t have her and so kills himself. Sound melodramatic? It is. However as over the top as the narrator could be, it had some wonderful imagery. And I also thought of it as a very ahead of its time representation of someone with something like bipolar. I read the beginning as evidence of a manic episode and then watched him dissolve into a depressive state. And instead of reading it as a failed attempt at the redemptive power of love, I saw it as a take on how you can’t really be saved from mental illness. I reckon it’s pretty ahead of its time in that regard. In fact, I liked how the romance was done in general. Some might say that the love interest isn’t given a voice- especially since all she says is in reported speech- but I think that’s half the point. She’s the ideal his mind fixes on and this idea of obsessive love isn’t praiseworthy- it’s an aspect of the human condition and often something for the mc to overcome (much like the object of Eleanor Oliphant’s affections or Gatsby’s Daisy). At the same time, there’s something honest in his desire for her, being attracted to her cheerfulness- which shows that the object of our desire can often be for a quality we lack. I also liked how Werther was given moments of lucidity and even of selfishness- making him more than simply a caricature. I think one of the only pitfalls was how long the investigative ending was- I felt it could have summed up the events after the letters ended in quicker time. Other than that, I thought it was a worthwhile read.

Wowee- that was a long one! Thanks for all those that stuck with it! So have you read any of these? What did you think of them? Let me know in the comments!