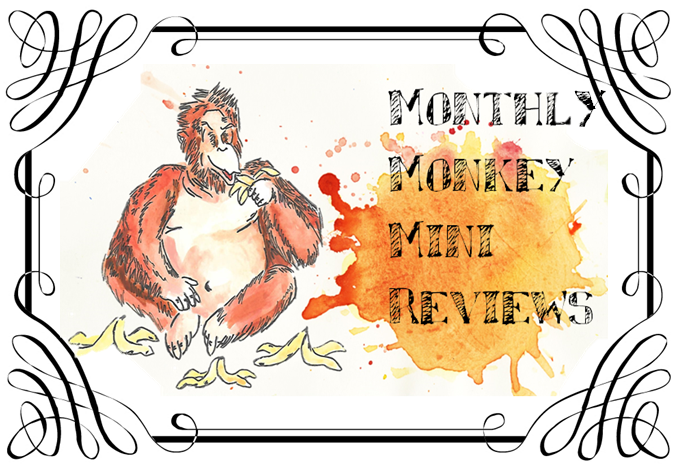 Well, August was both very quiet and ridiculously busy for me. The highlight was that for my mum’s birthday- where not only did we make plenty of cake, but we all got to fulfil a lifelong dream by going to see the Bolshoi Ballet’s Swan Lake. It was *magical* (I swear, if you’re ever within 100 miles of this, you should drop everything and go see!!) 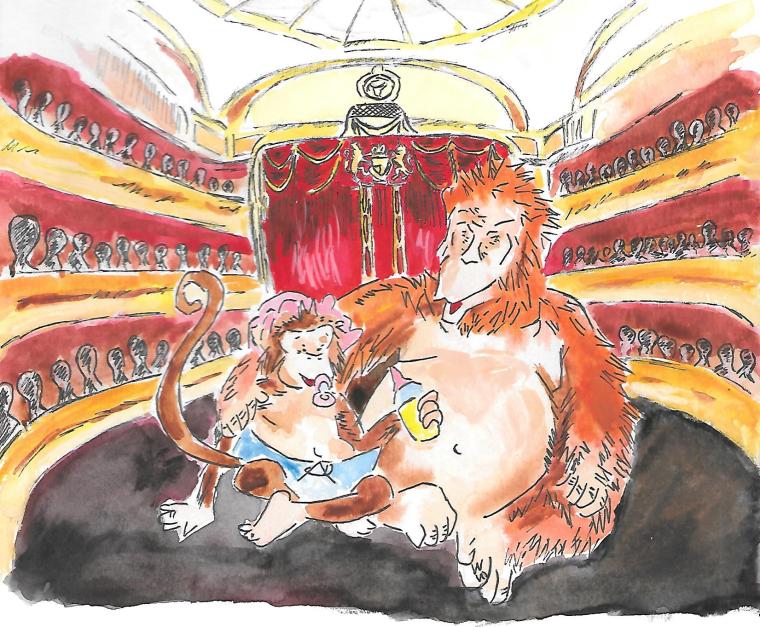 Funnily enough, it was a month of ballet, since my sister the Monkey Baby kindly wangled me a few free classes. Me and my two left feet weren’t any good, but I had fun (also I have turned it into an excuse to make another cartoon 😉) 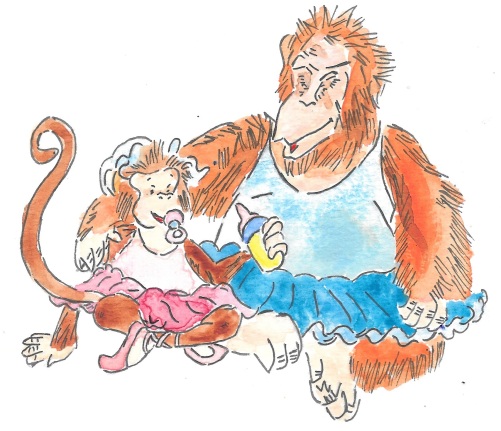 Anyhoo, I did read quite a lot buuuut I don’t feel passionate enough to review a number of them. So, *shrugs apish shoulders* only gonna just talk about a handful… 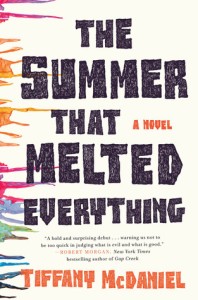 Summer that Melted Everything- I suppose this isn’t much of a hot take, but this book has the most beautiful writing. Somehow it comes across as natural, whilst also creating extraordinary imagery and transporting the reader beyond the bounds of this world. We are taken to another time and place, situated in a surreal landscape where anything is possible, and forced to reconcile ourselves with very real issues. I don’t know if this is a spoiler, but it’s not about the devil at all, it’s an exploration of the Aids crisis. And with that come some very interesting thoughts about the human psyche. Admittedly, there’s not much in the way of plot and an awful lot of this is designed to deliver the author’s opinion… and yet I was okay with that. It reminded me of Steinbeck. Sure, the author is opinionated, but when you can write like this, who cares? Now, I won’t suggest that all the opinions in the book are the author’s (obviously) but some of the views can’t be substantiated- it took the concept of sympathy for the devil too far for me when defending the indefensible- I just don’t see “have you ever lost control” as much of an argument. I do think, however, that it’s important to look into the heart of evil, if only so we know what not to do. And this was certainly a fascinating vehicle to take us on that journey. The story simmers from beginning to end, finally releasing in a cool torrent that takes the edge off. I’d say there are not many writers of this calibre in this generation, but really there aren’t many in any generation. 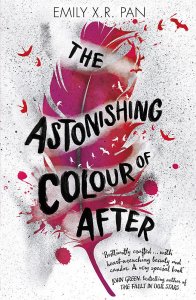 Astonishing Colour of After- whether you like this book will come down to how purple you can take your purple prose. Cos I shouldn’t even say “purple prose” for this- it’s more like a lilac-lavender-infusion of imagery. For me, not all the images worked, but when they did it was most definitely *astonishing*. When the language landed, it was exquisite. It allowed the story to soar above expectations. It nested in a family tree woven with lovely moments and messages. They were stitched together in a complex tapestry, a true work of art, which superseded nature in its beauty. I particularly loved the idea of being “changed by a ghost”, how the theme of memory was handled and the way this tied into culture. Having said that, there were times when it was a little overwhelming and clouded the simpler intentions of the narrative. And some of the plot wavered with superfluous narrative constructs- for my part, I’m beginning to tire of the “patriarchal/oppressive figure doesn’t want me doing art” trope- it’s a little tiresome and overdone (though I don’t doubt such ignorant people exist, I just wish protagonists would swiftly put forward a coherent argument against the view that *you can only succeed in the sciences*, rather than having a book-long unnecessary conflict with their otherwise reasonable parents). Personal opinions on that aside, this was a layered contemporary that deals with grief in a unique way and is well worth the read! 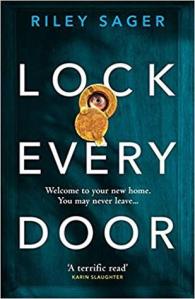 Lock Every Door– this book unlocked a primordial fear of powerful creeps. I loved the story within the story aspect (I nearly always do 😉); I appreciated the unique (to me) setting. I raced through this rather gothic book as if I was genuinely trapped inside the Bartholomew. Now, I will say that I guessed the twist in chapter 1. In fact, I figured out the second twist midway and got every plot beat down before I got to it in the narrative. I can’t tell you why, for fear of ruining the entire plot, but it’s signposted and if you’ve read other books with a similar twist, you’ll get it too. Also, highlight for minor spoilers ahead, the main character is not the sharpest knife in the drawer- she was trusting to the point of absurdity, she let the obviously dodgy guy know she was suspicious and didn’t RUN when the alarm bells in her brain were already going off. Although I have the benefit of having read more than one book in my life- presumably if she was into modern thrillers to know that it’s always the privileged white dude these days 😉 If she’d had that knowledge, there’d have been no plot. Having said all that, I can’t fault the execution and have to congratulate Sager on successfully stealing a night’s sleep from me 😉 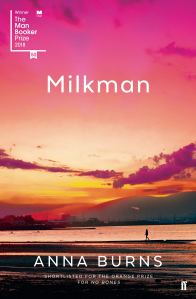 Milkman– oh the mixed feelings! I appreciated much of the themes and subject matter. The setting was particularly well done: the judgemental, closed community had a suffocating edge to it, the backdrop for the gossip gave the story a true feel of danger lurking, and the town’s inhabitants felt real. It definitely made me feel like I was in the thick of the Troubles. I was glad to have read this after having made my trip “over the water this year”. In spite of this strong sense of time and place, however, I can only give it credit for reminding me of a history worth caring about, rather than inspiring me to care in its own right. I was initially also taken by the writing style- I liked that it wasn’t quite literal and the ambiguity of using identifiers instead of names gave it a clever (and somewhat unsettling) lilt. Yet, as much as the writing style was distinctive, it also bogged down a lot of the telling. Much of the narrative came across as too convoluted and dense. Ultimately, it didn’t blow me away, but it’s not a bad book by any stretch of the imagination and it’s certainly pushing boundaries with the way it was told. 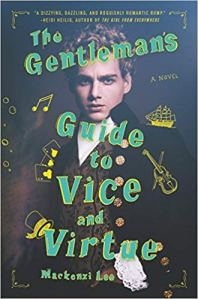 Gentleman’s Guide to Vice and Virtue– well this is a bananas books- in some good ways and some not so good ways! Unpopular opinion time: this contemporary take on the Grand Tour is both fun and incredibly silly. While the romance is sensational, the rest is pretty much shocking. Granted all of this was given away in the marketing, but this book is scandalous by 18th century standards… in that I couldn’t buy that this was supposed to actually be the 18th century?! Kudos to the author for doing her research and creating an elaborate backdrop for her story, but this pantomime impression divided the stage into villainous representations of history, versus some 21st century ideals in fancy dress. And, as much as the writing occasionally made me chuckle, too often it had me laughing for the wrong reasons (apparently certain biological functions cure women of squeamishness guys 😉). Then there were the (*ahem* these guys totally didn’t step out of the 21st century) heroes. Monty is simultaneously foppishly adorable and entirely unlikeable. Felicity is so acerbic that there’s no chance of me reading the sequel in which she stars. And Percy was thankfully more than his laundry list of identifiers- although perhaps too idealised to feel real. There’s an ongoing joke about the boys being clueless and seriously THEY’RE FRICKIN CLUELESS (I envisaged them as modern-day trust fund babies… which didn’t help me make sense of the fact they’re still breathing by the end of the book). I also didn’t feel like they got proper character growth- rather we were dealt far-too-frequent “teachable moments” instead because *18th CENTURY IDEAS ARE BAD* (who’d have thunk it)- alas this isn’t a substitute since I was just as irked by their personalities at the end as the beginning (le sigh). Regardless, the plot did plod along reasonably well and that romance was ridiculously good:

Oof that last review got a little longer than I intended… Anyhoo, have you read any of these? What did you think of them? Or do you plan to pick any of them up? Let me know in the comments!