*Received this book from Netgalley in exchange for an honest review*

I’m sorry, cheesy title, but I had to go there 😉 As you probably know I have a weakness for fairy tales and, above all fairy tales, I have an unhealthy habit of reading and watching *every single* Cinderella related story I can get my hands on. It’s one of those things I can’t really explain, but I’m addicted to the tale. So when I saw this book which had not only one of my favourite stories, but also involved fangirling over a space drama, which hello is very me, I just had to have it.

One of the best things about it was the world building for the in-book show Starfield that the heroine loves. I read somewhere that the author actually wrote out a plot for all the episodes and you can totally tell. The slogans are fun and realistic, the details were out of this world, and loads of it reminded me of cult classics like Firefly (incidentally one of my favourite shows). There was a spanner in the works in how it reminded me of some other shows I’m not hugely fond of, so I have to admit there was a bit of a disconnect for me there. That said, I never felt left behind by the story and I adored the virtual trail of glass slippers that led back to the classic fairy tale. All the subtle connections between the two stories were stitched together in an exquisite gown that most certainly ignited the stars.

The fandom within the story also worked well. I appreciated how the book explored the theme of finding your place in make believe, whilst tackling the issue of gatekeepers (the “you’re not a real fan” brigade) and having to deal with very real issues at the same time. It made a lot of sense that the main character, Elle, would disconnect from reality like this and acknowledged her loneliness through this topic in a way that gave the narrative plenty of heart.

I did get very emotional reading this (yes, it made me cry 😉 ) and experienced a pretty much all the *feels*. I went from chuckling to squealing to laughing at the speed of light. In terms of plot, it did take some time to reach the midpoint unfortunately, but eventually we had lift off! There weren’t really any surprises in terms of narrative, we all know the story by now, yet ultimately it took off into the stratosphere.

I won’t say that it was the most intergalactic romance I’ve ever come across, however, I did feel a spark there. Sometimes (Cinder)Elle(a) was a bit mean to her prince, but I could live with that. Plus, the side romance of Cal and Sage was so cute!! I really liked what was done with Cal’s stepsister character and that it wasn’t all textbook fairy tales.

That said, if you’re worried the mean step-relation role won’t be filled, oh boy no fear there! I always love to loathe certain characters and the stepmother is no exception. She most definitely lived up to her reputation here- though she was much more 21st century in terms of cruelty. I did get the sense that the author was trying to bring forth more modern ideas, giving Elle a bit more autonomy outside her home life, which made a certain kind of sense- sometimes it’s hardest to confront the biggest problems.

All in all, there was lots to like about this unique Cinderella adaptation!

So have you read this? Do you plan to? Let me know in the comments!

Okay, so a few days ago I shared a post celebrating my 300 followers and asked you to respond to some prompts so we could create an exquisite corpse story. Thanks to all your amazing (and hilarious) responses, I’ve cobbled together the most bizarre version of Cinderella known to mankind. And once again, thanks to Elm whose post inspired me to do this in the first place. So without further ado, happy reading…

***Disclaimer: I used Perrault’s version as the basis for this- although not much remains of the original***

Once upon a time there was a gentleman who took the haughtiest, proudest woman in the world for a second wife. And as a second wife, she had lots of things that all came in twos. Firstly, she had two ambitions, that she reflected upon alone after every birthday party, wondering if it was too late (ooh mysterious…). Secondly, she had two mirrors set up in front of her. One was dull and showed her reflection, the other a more twisted world. She reached out, feeling the cold surface give way at the touch of her hand- because she was  a dastardly villain…

“Mirror mirror on the wall,” she said- oh wait wrong fairytale- erm I guess she’ll be doing a crossover at some point- better get back to the story at hand for now…

Where was I? Oh yes, I was talking about what she had. Well, she had two melon sized oranges in her bag. Just the two.The only two. Oh and she had a couple of bulbous toads that she treated like daughters (but who cares about that- let’s talk more about oranges…). Her husband on the other hand had a daughter whose gentleness and goodness were without parallel. (What about those oranges, hmm?)

No sooner was the wedding over than the stepmother’s ill-humour revealed itself. She could not abide the girl so she turned her horse down a dusty sideroad to avoid her notice and was generally a prick to her (it probably had something to do with oranges). She also made her sleep by the fire, which was why she ended up being called Cinderella.

Now the king’s son decided to shave his right leg and lick his lizard because he was going to hold a sci-fi convention so that he could find a wife. When the two toads heard that they had been invited, they were in high spirits.

They called Cinderella, saying, “Wicked old bat- find me my hat! We are going to the sci-fi convention at the king’s castle.”

When the happy day arrived, they set of to see if Alexander at McDonald’s would give them a couple of free fountain drinks and then went to the mystical woods to find that special flower that they wanted. It was the kind that had all the colours of the rainbow. But when they found it, the flower was too big to bring back to the castle- which was where they were headed for the sci-fi convention.

Forgetting their random quest, they set off to the palace and left Cinderella behind. Cinderella began to cry once they were gone. Pumba from the Lion King dressed as Xena the Warrior Princess, who came upon her all in tears, asked what was troubling her.

“I should so like to go to the sci-fi convention!” Cinderella sighed.

“You shall go to the sci-fi convention Cinderella!” Pumba said. “Go into the garden and fetch me a pumpkin.”

Cinderella left immediately, gathering the finest pumpkin she could find. Pumba struck it with a wand and the pumpkin was changed into a one-eyed one-horned flying purple people eater.

“Don’t worry,” replied Pumba, “it’ll get you to the sci-fi convention just fine. So long as it doesn’t eat you.”

When she arrived, everyone thought that she looked like Professor Trelawny from Harry Potter in a batgirl suit. The king’s son approached her and gave her a book and hugged her before telling her he got into Harvard University. She kicked him in the you know where- he regretted it instantly. But then she decided to give him a chance because he was a prince and he was *hot*. While she was chatting up this crazy hot person, Cinderella heard the clock strike a quarter to twelve. She immediately made a low curtsey and departed as quickly as she could.

The prince followed her but could not catch her. However, she (a little too conveniently) dropped her squashed banana, which the prince picked up. Cinderella reached home without all finery, in shabby clothes and without having been eaten.

A few days later the king’s son issued a proclamation that he was going to sell his apartment to live in a tree house and he was quitting his job. He was worn out with his boss’ loud mouth and his daily chaotic tasks. “It’s your turn to work now,” he said to his wife. And then he remembered that he didn’t have a wife- which was why he held a sci-fi convention- so he decided he would marry whoever’s foot exactly fit the squashed banana. (What? He’s talking to imaginary people- in comparison the squashed-banana-slipper plot is pretty sane).

Pretty terrified by the crazy ex-prince, his loyal servants began trying it on all the women in the court. However, it was all in vain. Soon it was taken to the two toads, who did their utmost to force one of their feet into the squashed banana, but they could not manage to do so.

Cinderella, who witnessed their efforts, said: “Blimey you sure got going fast! It’s not big enough for my supreme purposes” 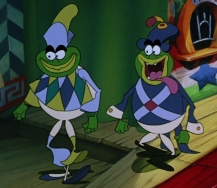 The astonishment of the two toads was great, but it was even greater when Cinderella took another squashed banana out of her pocket and put it on the other foot. At that moment Pumba arrived dressed as Xena the Warrior Princess again and he gave a tap with his wand to Cinderella’s clothes, which became even more beautiful than the clothes she had previously worn. The two toads then recognised her as the bat girl impersonator they had seen at the sci-fi convention. They threw themselves at her feet begging her pardon for all the harsh treatment they had made her endure.

Cinderella said: “Don’t worry. I got your back. I’ll tie you to my car’s spoiler and drag you around. No one will know.”

(I’m assuming the toads ran away at this point) Anyway, dressed as she was, she married the prince and *dot dot dot*… Once it was all over she moved to her side of the bed and said “you can sleep in the wet patch”.

Yeesh- that got interesting! Cinderella’s horrified! 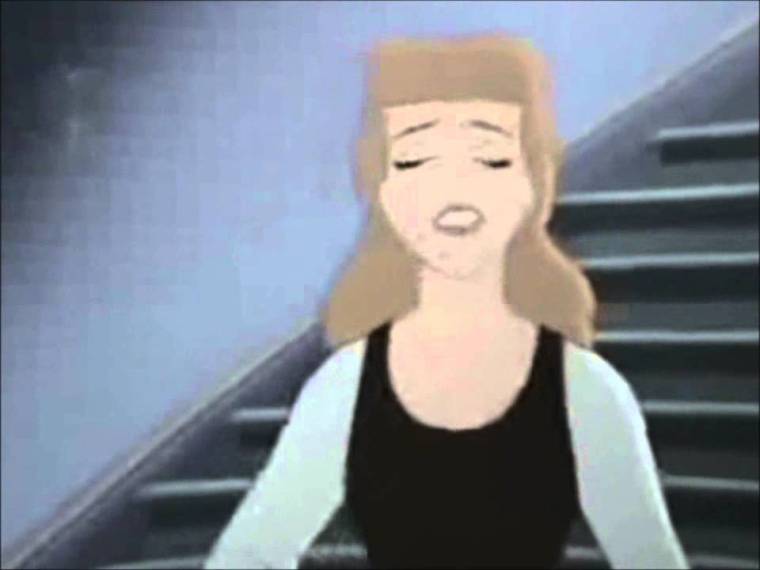 Thanks so much to all the contributors:

Life and Other Disasters

I literally couldn’t have done it without you!!!

(I hope you’re all proud of yourselves for turning an innocent fairytale into… this :p )