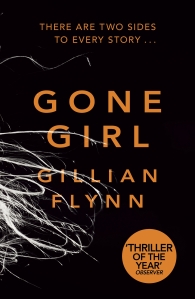 So I made the classic mistake: I watched the film before I read the book. And I have to say because as I was reading it, I couldn’t help but think “this would be so much better if I didn’t know what was gonna happen!” Cos this book has so many twists and turns that it easily could’ve been a complete mind-bending shocker. But it wasn’t- because I knew *exactly* what was gonna happen- which was a real shame.

It didn’t completely spoil my enjoyment, because this is a really well-crafted book. According to Amy Dunne, cool girls don’t exist- but not to worry cos cool books definitely do- this one proves it!

I was also glad to see that the ending worked so much better in the book than the film. Half the reason it was better was because having literally been inside the character’s heads I was able to understand why they made certain decisions (as I said, no spoilers). That made it far less frustrating (I mean, there’s still an element of frustration, but at least it made sense). Also, the ending was given far too much space in the film- 30 pages worked out as half an hour and so much that was speculated on was added. Here, it felt condensed, to the point and just drilled home the whole point of the story. Which is another reason why I should have read the book first!

So the moral of the story is READ THE DAMN BOOK BEFORE YOU WATCH THE FILM.

It’s kind of appropriate that I’m posting a review of “Gone Girl”, cos I may be gone for a few days (well, I may get the chance to read posts and comment, but I definitely will not be posting).