***Received from Netgalley in exchange for review- but any spicy takes are all me!***

There’s no two ways about it: this is an unusual book. At its heart a mystery- yet with its heavy dose of the supernatural and its hints of horror, this isn’t you run-of-the-mill YA. It’s surreal, speculative and a little out there. But what can you expect from the author who gave us Wilder Girls? And yes, I feel it’s necessary to compare it to the Wilder Girls, because I’m beginning to feel like this author is doing so much of her own thing, she’s only truly comparable with herself… and that’s rather thrilling.

Despite a somewhat meandering (but still intriguing) start, the plot has potency. The author has a real gift for drawing you into her world and vividly set the scene. Not to mention the characters she casts to bring the story to life- they are all fractured in their own way, yet reflect back parts of reality. They carry the oddness and the moody tone. Again, it doesn’t quite remind me of anything else.

Then there’s the mystery itself. Full of those kind of jump scares that keep you on your toes and creepy realisations that set your hair on end. The mash-up of genres is interesting, giving answers and raising more questions still. I got a sense of a mythic elements, threading through the narrative. I did see some of the outcomes coming- though that hardly matters. It’s the kind of story that enjoys giving you bits and pieces- just so the slow-dawning terror of what is really going on can freak you out all the more. Plus, this does give you a more tangible ending than Wilder Girls (though I can’t actually decide which one is ultimately more unsettling).

And that’s really all I can say about it without getting into spoilers. I wrote a lot of things down in my notes that make no sense out of context (which is unfortunate, because it’s quite funny reading them back and seeing how my brain coped with the all the *whoas* this book delivered 😉).

I easily burned through this in a day and got more than a few chills along the way. And it definitely stands out as something a little bit different. (Also I have to mention how incredible I think that cover is!!) 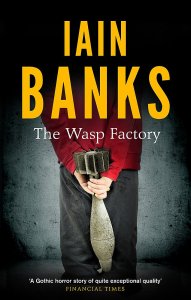 For most of this book, I genuinely thought I had a winner on my hands. It was a fascinating, well written and cleverly constructed monologue from the perspective of a sadistic killer. I was absorbed by the slow reveal and revelled in the way it kept up suspense, right until the end. Most of all, I thought the voice was incredibly powerful and felt like I got a sense of what kind of beast we were dealing with from page one… I was wrong.

Perhaps part of it is that I’m conditioned by a lot of thrillers/horror type books to assume the worst of the murder-y protagonist and suspect the reliability of their narration. This particular character had all the hallmarks of evildom I’ve come to expect:

The lack of trust for other people, which hinted at some paranoia- check

I mean, it’s quite clear that the main character is not quite right in the head. He even has a Thanos moment, saying “I ought to redress the balance at least slightly”. His warped sense of guilt, due to the fact he claims to have liked most of his victims or felt sympathy for them, makes for an interesting insight into the workings of his mind. I also appreciated the way he often transferred the crime onto an inanimate object, like a balloon, in order to distance himself from his own actions. And yet at the same time, he’s clearly a cold-blooded killer, whose murders are premeditated and vicious. Like I said, this book seemed like it had all the ingredients to cook up a satisfying story about a villainous creep.

So what went wrong?

That mothereffing twist. The more I mull it over, the less it works. Spoilers up ahead, but making him a woman all along was far from the best resolution. At first, I thought, huh, this has interesting implications… and then I started to figure out what those implications were and I wasn’t happy. Primarily, because I got the sense from the ending that there was supposed to be some kind of message locked into this reveal and I couldn’t for the life of me figure it out. Was it trying to say that if you took a woman and forced them to be a man, they’d automatically become a murderer? Cos that’s effed up. I get that the main character is psychologically abused into thinking they’re a defective man the whole time, but that doesn’t exactly change the fact they’re a monster in their own right. Being a victim of his father’s evildoings also doesn’t exonerate her from all the shit she’s caused- and yet it’s implied that somehow this person can go on and live some sort of life in society now that this secret has been uncovered… riiiighhht. So whatever idea the author was trying to get across, it didn’t quite land for me (not even with the suddenly-adopted preachy tone employed at the last minute).

However, the reveal did play in a little to the psychological elements that had previously been threaded through the story. Instead of his misogyny, for instance, being down to easily justifiable (to the mc’s mind at least) reasons, there are deeper issues at play. Being taught to be evil ends up playing a greater role in the story, since the protagonist has literally been taught to hate their own gender by the father’s more subtle lessons (again, there’s somewhat of an issue with the implication that being raised male will automatically make you a little toxic). You could even say that symbolically the lead acts unwittingly to victimise other characters since they’ve been victimised unwittingly. It’s just that… the story didn’t require that kind of explanation. There was scope within the story to show that the character bullies because they have the power to take advantage of those weaker than them- not because there was genuinely a conspiracy against them all along. The explanation actually did very little to explain why the main character resorted to murdering their peers and takes away from any psychologically rewarding analysis.

Plus this plot twist actually causes some plot holes to spring from nowhere. Suddenly the fear of authority and Freudian distrust of the father figure are abandoned by the massive shift in the story. This unfortunately made the story feel incomplete- all the previously raised suggestions become a “neat” conclusion that didn’t actually answer a lot of questions. A lot of those subjects felt like pointless misdirection by the end.

It’s a pity, because before that it had all felt tight and brilliantly structured. I liked the non-chronological account. I thought the mc’s anger, darkness and raw resentfulness kinda worked. For the most part, it was a glimpse into the worst recesses of the human mind. The harshness of lines like “Children aren’t real people” clashed with inner decency and gave the character the potential to be one of literature’s villainous “greats”. Some parts were icky- the Eric thing is too much to even comment about- yet they provided a (in)decent backdrop for the narrative. But by trying to tie everything neatly up in a convenient bow, a lot of that was lost.

Clearly this book was not perfect and I didn’t quite feel that it came totally came together in the end. That said, the book had a great deal of merits, which prevented me from completely slashing the rating at that ending. The writing was of such a brilliant standard that most of the way through the book I thought it was easily worthy of 5 bananas. Furthermore, its position in the horror genre means that I can forgive it for not feeling all that realistic. Seeing it as more fantastical allows me to forgive it the somewhat nonsensical messaging. And on the positive side, I cannot stop thinking of its violent and pervasive imagery. The words of the text stand alone from the author’s ultimate intrusion into the story and there was real power behind a great deal of it. That’s why I gave it:

So have you read this? What did you think of it? What did you make of that ending? And for those of you that haven’t read it, what was the last book you read where the finale just boggled the mind? Let me know in the comments!